England manager Hodgson has an embarrassment of riches up front, but Harry Kane, who started in the 1-1 draw against Russia and win over Wales, has struggled to make an impact in France 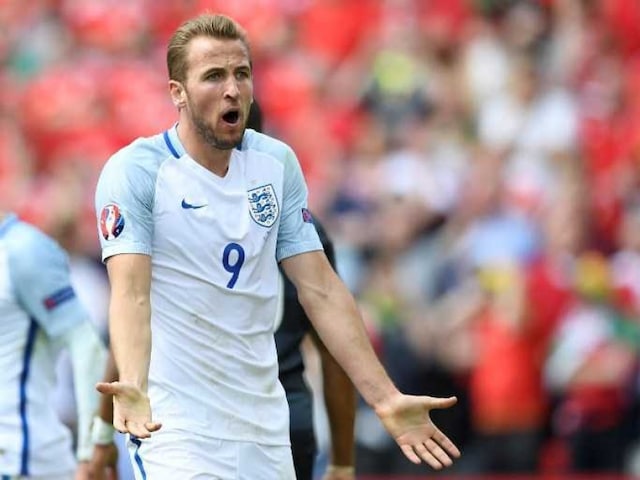 England striker Harry Kane has endured a frustrating start to his Euro 2016 campaign and could make for either Jamie Vardy or Daniel Sturridge, both of whom came off the bench to score in the team's victory over Wales.© AFP

England take on Slovakia on Monday in the key battle for first place in Group B at Euro 2016 with Roy Hodgson mulling over which of his strikers to deploy.

Jamie Vardy and Daniel Sturridge proved their form by coming off the bench to dig England out of trouble in their 2-1 win over Wales in Lens.

England manager Hodgson has an embarrassment of riches up front, but Harry Kane, who started in the 1-1 draw against Russia and win over Wales, has struggled to make an impact in France.

Leicester City's Vardy says he would be content with another cameo off the bench in Saint-Etienne having come on after the break against the Welsh.

"I'd more than happy with that. We'll have to wait till Monday what team the boss puts out and hopefully we can get the job done," said Vardy.

"I think it is tough for him, but competition for places is good for the squad itself.

"And with the options we have got available, we can use different systems as well."

Kane's lack of form in France has been attributed to his efforts for Tottenham Hotspur in the Premier League title race.

Kane has scored two goals in his last seven for club and country, Sturridge has three in six and Vardy has four in five.

But Vardy is backing his rival to prove his form on the Euro 2016 stage.

"He (Kane) doesn't seem tired, I'm sure he'll want to keep starting and hopefully get on that goal run," said Vardy.

"He'll be putting the extra effort in training as well to hopefully stay in the starting lineup and get cracking."

Victory over the Welsh on Thursday left England top of Group with four points.

But with both Wales and Slovakia on three points, nothing is decided going into the final round of matches.

Wales take on Russia in Toulouse, but England will want the three points to make sure they progress as group winners.

History favours the Three Lions who have won all of their three previous meetings, but Martin Skrtel's Slovakia are eyeing an upset.

One man does not make a team, but Napoli attacking midfielder Marek Hamsik is the lynchpin in Slovakia's attack.

There is so much hype around Hamsik back home that Slovakian newspaper Novy Cas insists he is better than Portugal's superstar Cristiano Ronaldo.

Hamsik proved how crucial he is to his side's chances of reaching the knock-out stages with a superb goal in their 2-1 win over Russia.

He hopes for more of the same against the Three Lions.

"It was a beautiful moment. I watched it about twenty times later. It truly filled me with joy," said the 28-year-old of his goal against Russia.

Slovakia midfielder Jan Gregus said his side has their work cut out to get a result against England.

"They are not favourites just for the group, they are considered one of the favourites to win the entire tournament," he said.

"No matter how, I think we'll stay in the tournament."

Comments
Topics mentioned in this article
England Slovakia Wales Jamie Vardy Harry Kane Daniel Sturridge Roy Hodgson Euro 2016 Football
Get the latest Cricket news, check out the India cricket schedule, Cricket live score . Like us on Facebook or follow us on Twitter for more sports updates. You can also download the NDTV Cricket app for Android or iOS.