Belgium wasted a series of great chances to put the game to bed before Michy Batshuayi with his first touch as a substitute, Hazard and Yannick Carrasco scored in the last 12 minutes 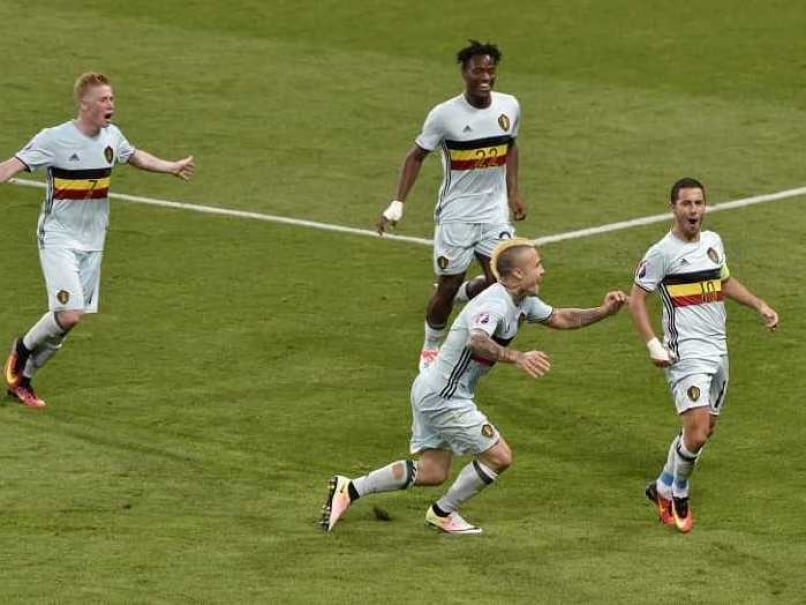 Belgium's forward Eden Hazard (right) celebrates his goal with teammates during the Euro 2016 Round of 16 match against Hungary at the Stadium Municipal in Toulouse on Sunday.© AFP

Eden Hazard scored his first goal of Euro 2016 as Belgium cruised into the quarter-finals with a 4-0 win to end Hungary's fairytale campaign.

Belgium go into the European Championship quarter-finals for the first time since losing the 1980 final. They were dominant throughout at Stadium de Toulouse after Toby Alderweireld headed them into a 10th minute lead.

The Red Devils wasted a series of great chances to put the game to bed before Michy Batshuayi with his first touch as a substitute, Hazard and Yannick Carrasco scored in the last 12 minutes.

Belgium now meet Wales in Lille looking for a place in the semi-finals, but on the back of this promising performance coach Marc Wilmots will be looking for improvements in front of goal.

Hungary impressively won their group but if they struck any fear into the hearts of Belgium's players, it did not show.

From Kevin De Bruyne's speculative fourth-minute strike that sailed Gabor Kiraly's crossbar, the Red Devils were too hot for a Hungary making their return to a major tournament three decades after the 1986 World Cup.

Almost from kick-off, Kiraly was kept busy as Romelu Lukaku, then De Bruyne, after Hazard's superb delivery, tested the goalkeeper.

When Adam Lang hauled De Bruyne to the ground on the left flank, the Manchester City forward promptly dished out the punishment with a superb inswinging free-kick that Alderweireld headed past Kiraly at his back post.

The opener settled Belgian nerves and Hazard in particular dazzled fans with some mazy runs, dribbles, and sublime passes that carved open the Hungarian defence.

Despite their attractive football, a lack of clinical finishing left Belgium at risk during an encouraging Hungary fightback in the second half.

Kiraly did well to block De Bruyne's effort with his feet after he powered on to Lukaku's sweeping pass behind the Hungarian defence.

But De Bruyne headed Lukaku's perfectly-weighted chip into Kiraly's arms. And when Zoltan Gera gave possession away cheaply in midfield, Lukaku's one-two with Radja Nainggolan saw the Everton striker skew wide as De Bruyne ran in unmarked at the back post.

Dries Mertens won a free kick when he was charged from behind by Tamas Kadar but De Bruyne's superbly-struck free kick bounced off Kiraly's crossbar.

The best of Hungary's few chances came just before the interval when midfielder Gergo Lovrencsics let fly a rasping drive that sailed just over.

Belgium spurned another chance on the stroke of half-time when Mertens' close-range shot was deflected by Adam Lang.

Immediately after the restart, Kiraly palmed over Hazard's right-footed drive, but Hungary came fighting back. Striker Adam Szalai fired into the side-netting before rising above the Belgian defence to send a deflected header wide.

Adam Pinter's deflected lob forced Courtois to tip over, and then Roland Juhasz heading well wide from the resulting corner.

But Belgium responded in style.

Michy Batshuayi came off the bench to punish Hungary when he ran in unmarked after the hour to first-time his shot past Kiraly.

The 'keeper was then left clutching at thin air when Hazard ran across the edge of the area unchallenged to beat him at his far post.

Carrasco added their fourth in the first minute of added on time when he powered down the middle on the counter to beat Kiraly.

Comments
Topics mentioned in this article
Eden Hazard Michy Batshuayi Yannick Carrasco Toby Alderweireld Gabor Kiraly Adam Lang Belgium Hungary Euro 2016 Football
Get the latest updates on ICC T20 Worldcup 2022 and CWG 2022 check out the Schedule, Live Score and Medals Tally. Like us on Facebook or follow us on Twitter for more sports updates. You can also download the NDTV Cricket app for Android or iOS.