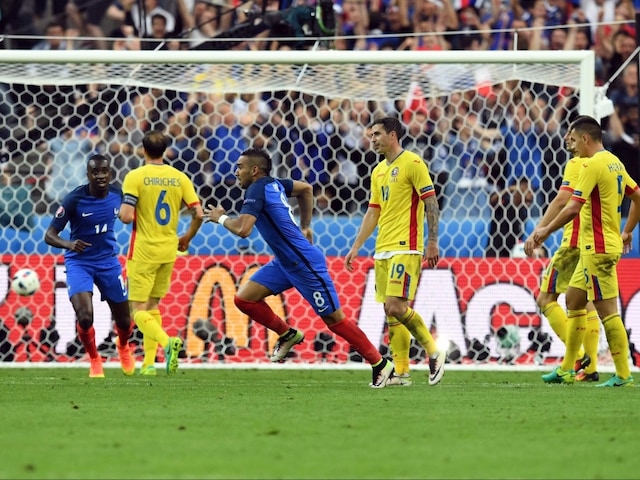 Dimitri Payet's stunning 25 metre strike a minute from time got hosts France off to a winning start at Euro 2016 on Friday as they beat Romania 2-1.

Payet was France's standout performer all night. His cross also created the opener for Olivier Giroud before Bogdan Stancu's penalty looked to have handed Romania a point.

However, the mercurial West Ham playmaker produced a moment of brilliance as he smashed the ball into the top corner to ensure France's month-long festival of football got off to a flier.

"We had trouble getting out of the blocks," French coach Didier Deschamps said.

"But its good to get the first game out of the way and to win," he added.

An emotionally charged atmosphere at the Stade de France just seven months after suicide bombers tried to get inside during a France-Germany friendly on a night of widespread attacks across Paris that killed 130 people, was brought to fever pitch by an opening ceremony headlined by French DJ David Guetta before kick-off.

However, the hosts made a nervy start and Romania should have been ahead inside five minutes.

A Romanian corner was flicked on by Florin Andone to the back post where Bogdan Stancu's effort from point-blank range was brilliantly blocked by France captain Hugo Lloris.

Deschamps's men settled as the first-half wore on and Giroud and Antoine Griezmann twice came close to opening the scoring.

Giroud flashed a header just wide from Payet's cross before Griezmann nodded a loose ball against the bar from a narrow angle.

Griezmann was desperately unlucky when his low drive looked goalbound before a slight deflection took the ball wide from another sumptuous Payet cut-back and Giroud headed a decent chance over when unmarked from Payet's corner just before half-time.

These are the moments which make football great. #EURO2016 #FRAROU pic.twitter.com/4eAPJJg0lo

Stancu wasted another golden opportunity to put Romania in front just three minutes into the second-half, but he failed to hit the target on the volley after cushioning the ball on his chest.

Payet had beaten off stiff competition from Manchester United's Anthony Martial to claim his place in the starting line-up. The West Ham playmaker rewarded Deschamps's faith as he was the one French player capable of tearing the Romanian defence to shreds.

But the much-maligned Giroud finally scored the opening goal of the competition on 57 minutes when he rose above Tatarusanu to head home Payet's cross.

The lead lasted only eight minutes. France's shaky defence failed to clear their lines and Stancu was chopped down by Evra as he stormed into the box.

Stancu was not to be denied by Lloris from the spot as he calmly slotted the penalty into the bottom corner.

However, it was Payet who made the difference was more as he cut onto his less favoured left-foot with time running down before unleashing a fearsome drive into the top corner.

And Payet was in tears moments later when he rightly left the field to a standing ovation to be replaced by Moussa Sissoko in stoppage time.

Comments
Topics mentioned in this article
France Romania Euro 2016 Paul Pogba Dimitri Payet Bogdan Stancu Football
Get the latest updates on IPL 2020, check out the IPL Schedule for 2020 and Indian Premier League (IPL) Cricket live score . Like us on Facebook or follow us on Twitter for more sports updates. You can also download the NDTV Cricket app for Android or iOS.