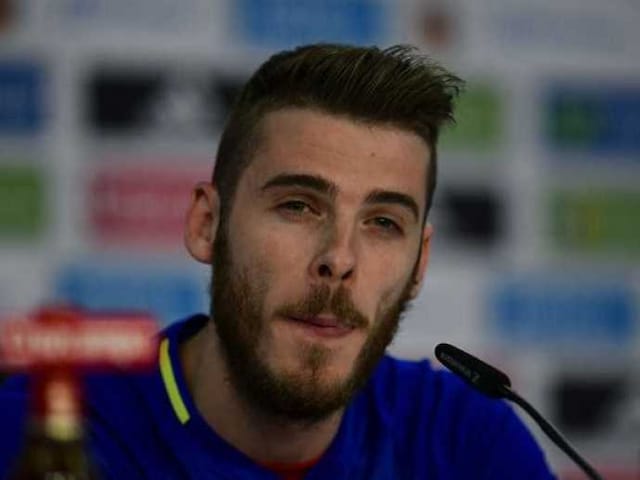 David De Gea's name has cropped up in a witness testimony, alleging that he organised a party at which women were forced to have sex with two footballers.© AFP

The Eldiario.es news website reported witness testimony that alleged De Gea organised a party at which women were forced to have sex with two footballers. The Manchester United stopper fiercely denied the claims as "a lie".

"David is very well, I see him training calmly and he was calm when we spoke about the subject," Pedro said.

De Gea is battling Spain captain Iker Casillas for a start when the holders open their Euro campaign against the Czech Republic on Monday.

Spain coach Vicente del Bosque explained De Gea had met with the rest of the squad on Friday to stress his innocence and was given his full backing.

"We are with him, we need to support him. We are calm, as is he and this will not destabilise us," Pedro said.

"He has a cool head and that is the most important thing for the group.

"It doesn't affect us. There is a very good harmony within the group, we want to start the tournament in the best way possible and that is by winning."

Pedro suffered a frustrating season at club level failing to live up to expectations after making a £30 million move from Barcelona to Chelsea.

However, having also been part of the Spain squad that crashed after just two games at the World Cup two years ago, Pedro is keen to make amends.

"I was here four years ago and now the players have a different mentality," he added.

"There is a desire to do something great, to have a great tournament.

"Maybe it is because we didn't have a good World Cup and we want to turn that situation around."

Comments
Topics mentioned in this article
David De Gea Pedro Spain Euro 2016 Football
Get the latest updates on IPL 2020, check out the IPL Schedule for 2020 and Indian Premier League (IPL) Cricket live score . Like us on Facebook or follow us on Twitter for more sports updates. You can also download the NDTV Cricket app for Android or iOS.