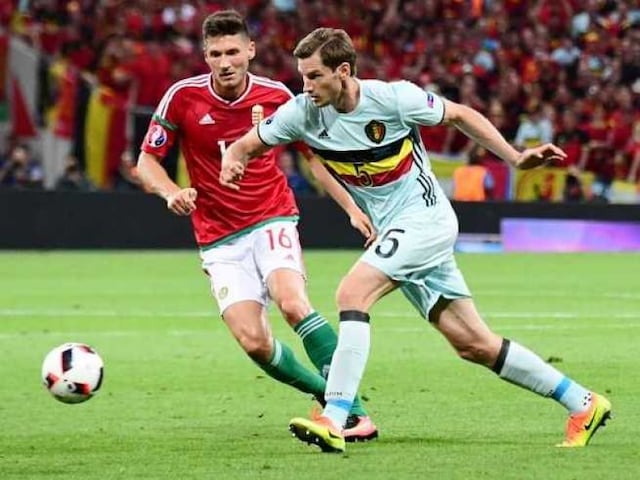 Injured Jan Vertonghen(right) is unlikely to feature in the Euro 2016 quarter-final clash against Wales.© AFP

Belgium have been dealt a major blow ahead of their Euro 2016 quarter-final against Wales after defender Jan Vertonghen was ruled out of the rest of the tournament with an ankle injury, media reports said.

The Tottenham Hotspur defender, 29, reportedly damaged ankle ligaments in training on Thursday and Belgian broadcaster RTBF said he is set to be sidelined for up to four months.

The Belgian Football Federation have yet to confirm the reports but coach Marc Wilmots was due to speak to the media at 1645 GMT ahead of Friday's match.

The injury would also come as a big blow to his club ahead of the next Premier League season.

"He's an outstanding performer. So if he misses the game, it's a big loss for Belgium. But they've got so much talent," said Wales coach Chris Coleman at a press conference in Lille, where Friday's match will be played.

There was better news for Belgium on Thursday as captain Eden Hazard returned to training for the first time since Sunday's 4-0 win over Hungary. He had been struggling with a minor groin problem.

Losing Vertonghen, however, would add to Wilmots' selection problems in defence, with centre-back Thomas Vermaelen already having been ruled out of the game due to suspension.

Jason Denayer of Manchester City is expected to deputise for Vermaelen while Vertonghen, who has played at left-back for his country at Euro 2016, is likely to be replaced by Jordan Lukaku, the younger brother of striker Romelu.

"We know Vermaelen's suspended, of course. But we can't look past ourselves. No disrespect to Belgium or any opposition, but we only ever concentrate on ourselves," added Coleman.

Belgium had already lost captain Vincent Kompany and fellow defenders Nicolas Lombaerts and Dedryck Boyata to injury before the start of the tournament.

Comments
Topics mentioned in this article
Jan Vertonghen Football Belgium Wales Euro 2016 Romelu Lukaku
Get the latest Cricket news, check out the India cricket schedule, Cricket live score . Like us on Facebook or follow us on Twitter for more sports updates. You can also download the NDTV Cricket app for Android or iOS.