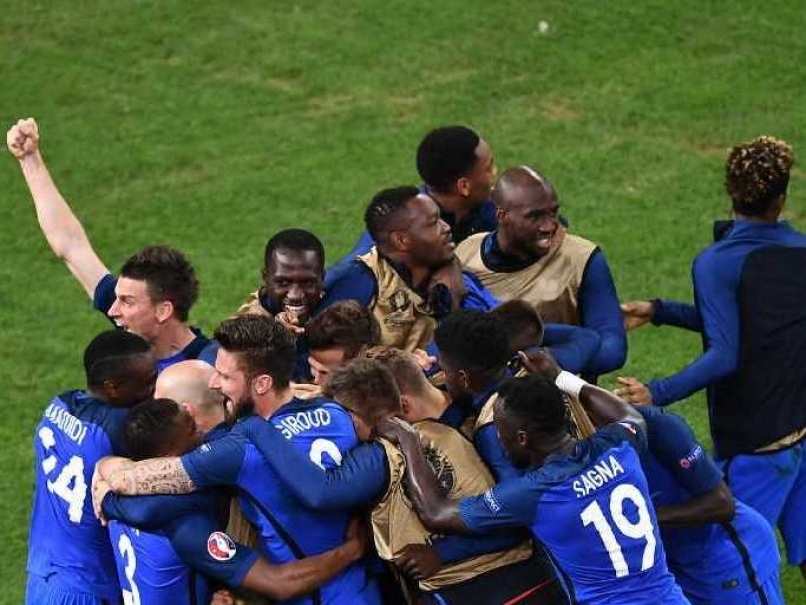 France players celebrate after beating Albania 2-0 in an Euro 2016 Group A match on Wednesday that helped them book their berth in the knockout stage.© AFP

Antoine Griezmann struck late on before Dimitri Payet added a second in injury time as hosts France secured their ticket to the last 16 of Euro 2016 with a 2-0 win over Albania on Wednesday.

France began their bid for a first European Championship title in 16 years with a nervous 2-1 win over Romania last Friday.

But despite creating a host of scoring chances against the Balkan minnows in a stirring second half, it took Atletico Madrid striker Griezmann to rescue a pale version of Les Bleus with a 90th-minute header at the Stade Velodrome.

But after a frustrating first half of few real chances for the hosts, Deschamps was quickly reconsidering his options.

Albania, missing captain and ex-Marseille player Lorik Cana through suspension following his sending-off in the tournament debutants' 1-0 defeat to Switzerland, deployed a defence-minded 4-5-1 that made their conservative tactics clear.

And France, despite showing plenty of promise throughout, struggled to come up with an antidote.

Payet, who hit a stunning winner for France last Friday, showed promise with a great delivery for Giroud but the striker's header was a yard over.

France's offside trap was non-existent when Napoli defender Elseid Hysaj broke free on the right to collect a long ball and deliver a cross that deflected off Martial as Armando Sadiku ran in towards goal.

It was a brief scare, and France responded with a string of mistakes that left Deschamps holding his head in his hands before the half hour.

As widely expected, Pogba replaced Martial for the start of the second half, inspiring the hosts to a far improved performance.

Seconds after kick off a great delivery from Giroud was helped on by Blaise Matuidi, but Coman's header from six yards out bounced just wide.

But France were given another scare when Bacary Sagna missed a dangerous delivery that came off the post, bounced off the head of Ledian Memushaj and went out for a goal kick.

This time, the scare was big enough to prompt a rousing French response.

Moments later, Payet met Giroud's nice lay-off to hit an inviting delivery with the outside of his right boot towards the back post where Pogba rushed in only to fire inches over.

When N'Golo Kante made a timely interception to help set up Coman on the left, Giroud timed his jump to perfection but his header glanced wide on 67 minutes.

Coman was replaced by Griezmann soon after, and moments later Giroud rose to meet Patrice Evra's delicately chipped delivery to fire his header off the post.

Deschamps replaced Giroud with former Marseille favourite Andre-Pierre Gignac with 13 minutes remaining, but as the hosts maintained their push for the opener it was Griezmann who broke the deadlock when he rose to meet Adil Rami's cross to beat Lazio 'keeper Etrit Berisha.

It broke Albania's resolve and five minutes later Payet claimed his second of the competition with a fine curling strike that beat Berisha at his far post.

Comments
Topics mentioned in this article
France Albania Antoine Griezmann Paul Pogba Dimitri Payet Euro 2016 Football
Get the latest updates on IPL 2020, check out the IPL Schedule for 2020 and Indian Premier League (IPL) Cricket live score . Like us on Facebook or follow us on Twitter for more sports updates. You can also download the NDTV Cricket app for Android or iOS.