Euro 2016: 40 Arrested in Paris Over Violence During Final 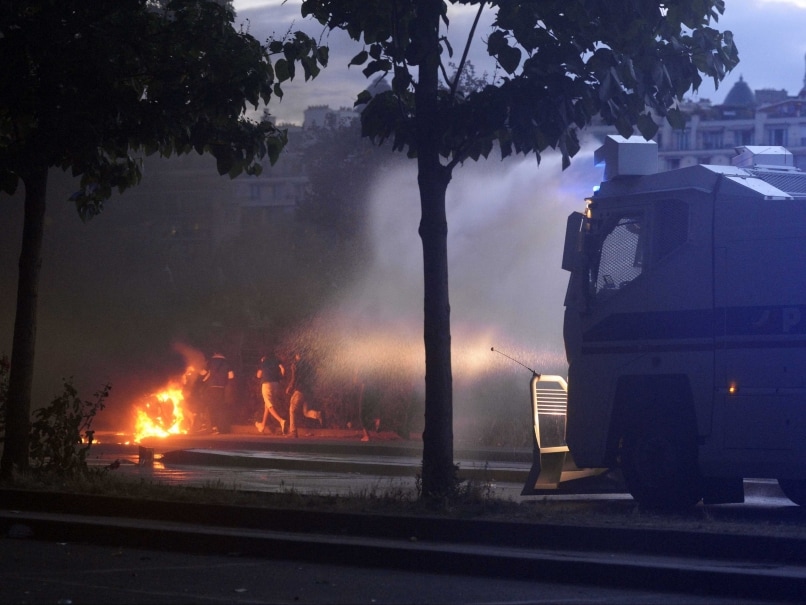 Police use water cannon against Fans for violence during Euro 2016 final.© AFP

Around 40 people were arrested in Paris on Sunday after police used tear gas and water cannon against football fans hurling glass bottles at officers at the Eiffel Tower during the Euro 2016 final.

Crowds of supporters, some donning France or Portuguese flags, gathered at the base of the Paris landmark before and after Portugal's stunning 1-0 victory over France after they were refused entry to the fan zone which was packed to its 90,000 capacity, Paris police said.

Other arrests took place outside the Stade de France where the match was played. They were for public disorder offences.

The base of the Eiffel Tower was engulfed in clouds of tear gas as riot police repelled the youths, who started fires on the pavement and threw bottles and other objects at the police lines, AFP photographers said. Police in riot gear faced off with crowds, as at least one police truck fired water at demonstrators.

The police, who had posted a message on Twitter and issued warnings in the Metro informing supporters the fan zone was full, used water cannon to extinguish the blazes.

The ground was littered with broken fencing and shattered glass as evening fell, with piles of rubbish burning and firefighters were later deployed to put out larger blazes on the streets of Paris, including at least one car that was set on fire.

Last week, riot police fired tear gas in clashes with youths on the Champs Elysees avenue in Paris after France's qualification for the Euro 2016 final.

Earlier clashes between fans at the June 11 England-Russia match in Marseille left 35 people injured in violence that French prosecutors have largely blamed on around 150 "well-prepared" Russian supporters who carried out targeted attacks on England supporters.

Portugal's shock win over France in the European Championship final was the country's first international title, though superstar Cristiano Ronaldo was forced to watch the match injured from the touchline.

The buildup to the football tournament had been overshadowed by fears of jihadist violence following November attacks that left 130 people dead. In the days before it kicked off, unions disrupted trains and grounded planes and uncollected rubbish built up in the streets in strikes and protests against labour reforms.

Comments
Topics mentioned in this article
Euro 2016 Portugal France Football
Get the latest updates on SA vs IND 2021-22, check out the Schedule and Live Score . Like us on Facebook or follow us on Twitter for more sports updates. You can also download the NDTV Cricket app for Android or iOS.