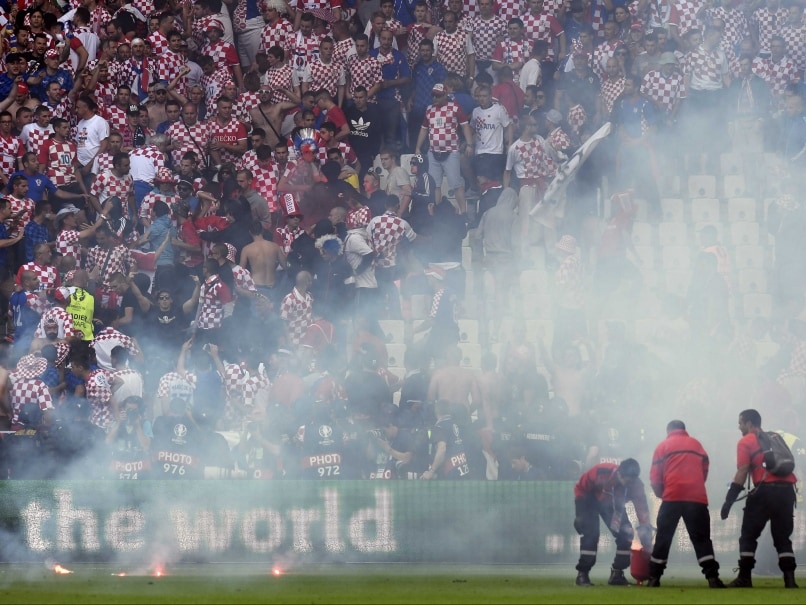 Fan violence during Croatia and Turkey's Euro 2016 match is the latest to mar the tournament. © AFP

UEFA hit Croatia and Turkey with disciplinary procedures on Saturday following flare-throwing incidents at Euro 2016 matches as the Croatian press raged at its "shameful" fans.

Croatian fans hurled flares on to the pitch in the 86th minute of the 2-2 draw with Czech Republic in Saint Etienne on Friday, while Turkish fans let off flares after their 3-0 defeat by Spain in Nice.

And it accused Turkey of a pitch invasion, throwing objects and setting off fireworks.

Croatian coach Ante Cacic called the country's fans "sports terrorists" after the incidents which caused a four-minute halt to the match.

A steward narrowly avoided injury when one of the flares exploded as he was clearing it from the pitch.

Croatian fans also fought among themselves in the chaos.

Even the country's president Kolinda Grabar-Kitarovic described the violent fans as "enemies of Croatia".

Less than a week after Russian fans tried to attack their English rivals inside the Marseille stadium, the flare incidents heaped new problems on the European Championship finals.

Croatia had been leading 2-1 when the flares were thrown, but after the stoppage the Czechs scored with a penalty to force a draw.

Croatia's football federation (HNS) said it had warned UEFA and French police in advance that hooligans were planning to disrupt the match.

"In the preparation of this match, HNS did everything possible to prevent incidents and therefore both UEFA and the French police were warned of hooligans' intentions to interrupt it," a federation statement said.

The HNS official in charge of security, Miroslav Markovic, said the federation had a "tip-off" there would be incidents in the 85th minute of the match, the HINA news agency reported.

Markovic also slammed Croatian authorities for failing for years to tackle the hooligan problem in the country.

"Inefficacy and lack of will to at least start resolving the problem incited the hooligans to continue with such acts," he said.

Violence around football in Croatia has increased over the past four years since former Croatian international Davor Suker took over the reins of the federation.

Some fans believe Suker and the federation are too closely linked with controversial former Dinamo Zagreb boss Zdravko Mamic, a key figure in Croatian football.

Some accuse Mamic of abusing the game in Croatia for his own gains and they protest against the national team in response.

Turkey faces punishment too after its fans let off flares and fireworks following the 3-0 defeat to Spain in Nice.

Meanwhile, a group of 20 Russian supporters including far-right agitator Alexander Shprygin was driven to Nice airport to be flown to Moscow.

The group are being expelled from France after the violent clashes with England fans before last weekend's game between Russia and England in Marseille.

The supporters, ordered out of the country for disrupting public order, were transported to the airport from a holding centre in Marseille in several vans, an AFP photographer saw.

French investigators believe the group includes violent and well-prepared hooligans, but it has proved impossible to bring specific charges despite police studying over 200 hours of video footage.

They were part of a group of 43 supporters detained by French police on Tuesday, including Shprygin, who is head of Russia's national supporters' association and an aide to nationalist lawmaker Igor Lebedev.

Three of the group were jailed for up to two years for their role in the Marseille street battles.

Thirty-five people were injured in the clashes, mostly English fans, including two who remain in a serious but stable condition in hospital.

The incident in Saint Etienne was just the latest involving Croatian fans in recent months.

They drew a Nazi swastika symbol on a pitch before a Euro qualifier against Italy in June last year.

UEFA ordered the country to play two Euro qualifying matches behind closed doors, deducted a point and fined the federation 100,000 euros ($112,000) over that incident.

In November 2014, Croatia's qualifying match in Italy was halted for 10 minutes because flares were thrown on the pitch engulfing Milan's San Siro stadium in smoke.

UEFA then ordered Croatia to close an 8,000 section of their ground for their next game and fined the federation 100,000 euros.

"I hope these people are identified and punished," said Croatia coach Cacic after Friday's trouble.

"These people are really scary, that is why I call them hooligans. These are not fans, these are sports terrorists."

Comments
Topics mentioned in this article
Euro 2016 Croatia Turkey Football
Get the latest updates on T20 World Cup, check out the T20 World Cup Schedule and Live Score . Like us on Facebook or follow us on Twitter for more sports updates. You can also download the NDTV Cricket app for Android or iOS.