UEFA Euro 2012: Van Persie ready to shrug off ghosts of the past

Robin van Persie has the most to prove among the stellar Dutch starting side against Denmark here on Saturday in their Euro 2012 opener but he claims he has matured enough to deliver. 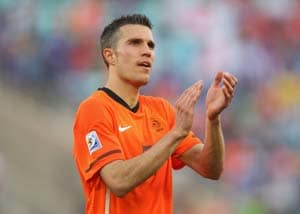 Robin van Persie has the most to prove among the stellar Dutch starting side against Denmark here on Saturday in their Euro 2012 opener but he claims he has matured enough to deliver.

The 28-year-old - son of two artists - has once again like at the 2010 World Cup controversially been selected by coach Bert van Marwijk to be the sole striker at the expense of Klaas Jan Huntelaar.

Not only has the coach's choice been questioned by most people back in Holland but also by Huntelaar, who understandably is not happy having finished top scorer overall in the Euro qualifiers and in the Bundesliga last season with 29.

However, both van Marwijk and van Persie can point to the latter having had a sensational campaign with Arsenal which yielded 37 goals in both the Premier League and the Champions League combined.

Nevertheless the memories of the 2010 World Cup loom large and the rather pathetic sight of van Persie patently out of form struggling to lead the line with just one goal in seven games to show for his efforts.

It made it all the more remarkable that the Dutch reached the final where they lost 1-0 to Spain in an eminently forgettable bruising contest.

Van Persie, though, is adamant that he is a different person this time round from the one of two years ago both physically and mentally.

"I am very calm and am in the form of my life," said van Persie, who was coached by van Marwijk at Dutch side Feyenoord.

"This Euro is my fourth major finals. I am now mature, a lot more capable of handling the pressure.

"I have not had serious physical problems this season. I played at a high level for 38 matches with my club. It has been my best campaign."

Van Persie, who has been at Arsenal since 2004 but has just the 2005 FA Cup win to show for his time there, has looked sharp coming into the championship having scored twice in the 6-0 hammering of Northern Ireland last weekend.

Much of this rediscovered sharpness at international level he puts down to the service provided by wingers Arjen Robben and Ibrahim Afellay.

"To score goals one has to have confidence in oneself and in those of your partners," said van Persie, who has shown rather more discipline on the pitch than he did as a schoolboy when he was often sent home early for unruly behaviour.

"With Ibrahim, we speak the same language 'football'. I am sure that we are going to achieve great things even if I accept that the tournament has the air of being a tough one.

"The objective is to win Euro. But for the moment we are looking no further than the first match against the Danes. This match will set the tone for the remainder of our tournament."

Van Persie, who will win his 67th cap on Saturday, has at least shown some mercy towards the aggrieved Huntelaar.

"I let Huntelaar keep the number nine shirt as he is very attached to it," said van Persie, who will wear the No 16 shirt.

Time will tell if it is the No 16 or the No 9 that shines brightest on the pitch.