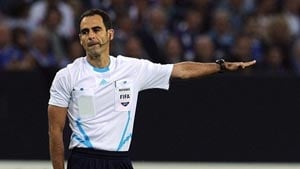 The tournament curtain-raiser kicks off in the Polish capital Warsaw at 6:00 pm local time (1600 GMT) and will be followed by the second Group A game between Russia and the Czech Republic in Wroclaw.

England's Howard Webb - who refereed the ill-tempered 2010 World Cup final - will be in the middle for that game.

UEFA said in a statement that Damir Skomina of Slovenia will officiate the Netherlands first game in Group B against Denmark on Saturday in Kharkiv, Ukraine, while Stephane Lannoy of France will take charge of the Germany-Portugal match in Lviv.

Comments
Topics mentioned in this article
Carlos Vela Euro 2012 Alou Diarra Lech Poznan Football
Get the latest Cricket news, check out the India cricket schedule, Cricket live score . Like us on Facebook or follow us on Twitter for more sports updates. You can also download the NDTV Cricket app for Android or iOS.