Dutch vice-captain Rafael van der Vaart added to the turmoil within the Euro 2012 squad on Tuesday by saying he was extremely disappointed at not having started their opening match against Denmark. 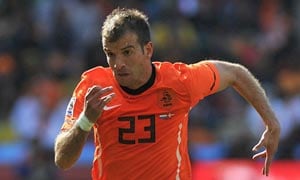 Dutch vice-captain Rafael van der Vaart added to the turmoil within the Euro 2012 squad on Tuesday by saying he was extremely disappointed at not having started their opening match against Denmark.

The 29-year-old attacking midfielder - who came on late in the second-half of the surprise 1-0 defeat - joined striker Klaas-Jan Huntelaar in expressing his annoyance at being ignored by coach Bert van Maarwijk.

It couldn't have come at a worse time as the Dutch need a result in Kharkiv, Ukraine, on Wednesday in their Group B game if they are not to be thinking of booking tickets home early just two years after they pushed Spain all the way in the World Cup final.

Dutch media had reported Huntelaar, who was angry at Robin van Persie being preferred up front for the Danish match, van der Vaart and defensive midfielder Nigel de Jong, who was annoyed at being substituted on Saturday, held talks with van Marwijk in which they expressed their disappointment.

Van der Vaart - like the other two part of the Dutch squad that reached the 2010 World Cup final only to lose to Spain - said he would not hold his tongue when it came to speaking out.

"I am very disappointed," van der Vaart was quoted as saying on the specialist website Voetbal International.

"The coach has his preferences, I am not part of them and I don't think that is going to change.

"We have seen in the past few years that the coach does not make changes to the starting line-up easily.

"It is great to have a nucleus of first choice players, a lot less so for those who have to sit on the bench.

"Besides I believe I am in tremendous form. I will continue to give 100% but at the same time I have the right to express my disappointment."

On Monday, Dutch playmaker Wesley Sneijder had said that there was no problem within the squad although it was only natural that there was some tension over selection with such egos to placate.

"It is not obligatory that we should all be friends in order to play together and win games," said Sneijder, whose 28th birthday celebrations last Saturday were ruined because of the Danish defeat.

"And I don't have the impression that there are clans, or small cliques that are opposing each other.

"If that was the case I would react, because I am here to become champion of Europe."

Sneijder, who had a injury-blighted season last term for Inter, admitted that it was not easy handling the squad.

"There are several players with huge egos in the team," said Sneijder.

"That is normal. Huntelaar is the leading scorer in the Bundesliga, Van Persie in England. De Jong won the Premier League title with Manchester City."

The Dutch have a tradition of self-imploding - one of the reasons for their continually flattering to deceive at major finals.

Present Russia coach Dick Advocaat experienced this on two occasions, first a power struggle with playing great Ruud Gullit in 1993 and then the following year with Edgar Davids at the 1994 World Cup finals.

Guus Hiddink - Advocaat's predecessor in the Russian hotseat - also had several episodes of such player power in his spell in charge from 1994 to 1998 with rumours of a split along racial lines at the 1998 World Cup finals the most serious one.

Comments
Topics mentioned in this article
Football Rafael Van der Vaart Alou Diarra Lech Poznan Robin Van Persie Klaas-Jan Huntelaar Euro 2012 Liverpool
Get the latest updates on IPL 2020, check out the IPL Schedule for 2020 and Indian Premier League (IPL) Cricket live score . Like us on Facebook or follow us on Twitter for more sports updates. You can also download the NDTV Cricket app for Android or iOS.