Alan Dzagoev scored his third goal of the European Championship and Jakub Blaszczykowski equalized in the second half as Russia and Poland drew 1-1 Tuesday. 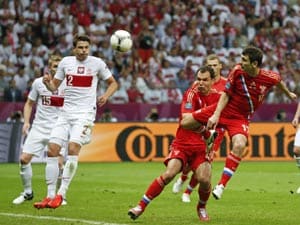 Euro 2012 co-hosts Poland kept their chances of a quarter-finals berth alive on Tuesday after drawing 1-1 with Russia, putting on ice their opponents' hopes of clinching the first slot in the knock-out phase.

The Poles, needing to take at least a point from the Group A match in the wake of their 1-1 tournament opener against Greece on Friday, were keenly aware of Russia's high-octane 4-1 performance against the Czech Republic the same night.

In what may be the most politically-charged fixture of the tournament, Poland looked the hungrier team in the first half, launching a series of convincing attacks on the Russian goal.

But they failed to capitalise on earlier chances including a slicing free kick in the seventh minute by Ludovic Obraniak, newly positioned as a left-side midfielder, with Sebastian Boenisch's attempt saved by Vyacheslav Malafeev.

Hard work appeared to have paid off when Eugen Polanski moved onto a through ball from lone striker Robert Lewandowski, who scored against the Greeks, and fired past Malafeev.

But fans and the Polish bench swung from ecstasy to misery when his 18th-minute shot was ruled offside.

A resurgent Russia picked up the pace, with captain Andrey Arshavin crossing in the 25th minute to fellow member of their striking triumvirate Aleksandr Kerzhakov, only for him to miss the target.

Polish keeper Przeymslaw Tyton - whose penalty-saving heroics after he came on as a substitute for red-carded first choice Wojciech Szczesny helped avoid a Polish defeat to Greece - saved a free kick from Arshavin a minute later.

Russia's efforts bore fruit in the 37th minute when rising star Alan Dzagoev, who notched up a double against the Czechs, latched onto an inswinging Arshavin free kick to open the scoring.

Poland, who were criticised for losing pace against Greece in the second half and throwing away their lead, returned from the dressing room keen to harry the Russians.

While they appeared tired, they battled hard, and finally equalised in the 57th minute when captain Kuba Blaszczykowski picked up a cross from Obraniak and fired home a left-footed piledriver.

There were nervous moments for both sides in the remainder of the half, with the noise levels rising in Warsaw's brand-new National Stadium.

Blaszczykowski, who along with Lewandowski and defender Lukasz Piszczek has enjoyed a stellar season at German double winners Borussia Dortmund, was named man of the match.

Sporting encounters between Poland and Russia are often high pressure, as they feed into centuries of antipathy between the two nations, and the rivalry in the stadium's terraces was palpable from the start of the match.

Tensions had risen in Warsaw beforehand, as police made dozens of arrests and used water canons to halt brawls between fans from both camps.

With the Czech Republic having beaten Greece 2-1 earlier on Tuesday, Russia top Group A on four points after two rounds of action with the Czechs second on three points, Poland third on two and Greece fourth on one.

Russia wrap up their group matches against Greece on Saturday, when Poland face the Czechs.

Comments
Topics mentioned in this article Football Jakub Blaszczykowski Alan Dzagoev Euro 2012 Poland Russia Alou Diarra Lech Poznan
Get the latest Indian Premier League 2020 news, check out the IPL 2020 schedule, Cricket live score . Like us on Facebook or follow us on Twitter for more IPL 2020 updates. You can also download the NDTV Cricket app for Android or iOS.
Related Articles