Euro 2012: Bendtner gets one match ban for underwear stunt

Denmark forward Nicklas Bendtner was banned for one 2014 World Cup qualifying match on Monday for revealing an unofficial sponsor's name on his underpants while celebrating a goal at the European Championship. 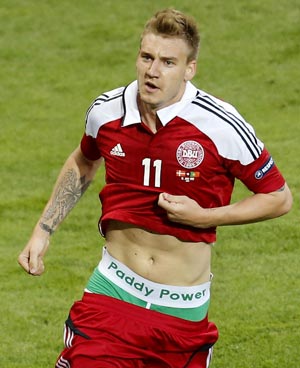 Denmark forward Nicklas Bendtner was banned for one 2014 World Cup qualifying match on Monday for revealing an unofficial sponsor's name on his underpants while celebrating a goal at the European Championship.

Bendtner can appeal the decision.

The punishment rules him out of Denmark's opening World Cup qualifier at home to the Czech Republic on Sept. 8.

Bendtner's financial penalty is the second-highest imposed by UEFA at Euro 2012. The Russian football association was fined 120,000 ($151,000) after its fans attacked stadium stewards in Wroclaw following the team's group game against the Czech Republic.

Bendtner raised his shirt and lowered the top of his shorts slightly, revealing the name of a betting firm across the top of his underpants, after scoring his second goal in a 3-2 loss against Portugal last Wednesday.

The laws of football managed by FIFA relating to players' equipment also state that players "must not reveal undergarments showing slogans or advertising."

Bendtner was also separately disciplined by the Danish Football Association for flouting team policy. The association has official ties to a rival gambling company.

Denmark were eliminated from Euro 2012 on Sunday after losing 2-1 to Germany.

Comments
Topics mentioned in this article
Football Nicklas Bendtner Alou Diarra Lech Poznan Manchester City Portugal Euro 2012
Get the latest updates on India vs Australia Series, check out the India vs Australia Schedule for 2020-21 and Ind vs Aus live score . Like us on Facebook or follow us on Twitter for more sports updates. You can also download the NDTV Cricket app for Android or iOS.