Chelsea midfielder Juan Mata, with the Champions League already tucked under his belt this season, says that he hopes to play his part in helping Spain defend their Euro title - but warns their first opponents Italy will pose a tough opening challenge. 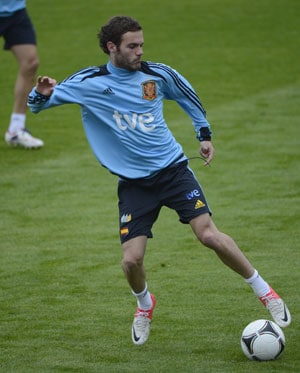 Chelsea midfielder Juan Mata, with the Champions League already tucked under his belt this season, says that he hopes to play his part in helping Spain defend their Euro title - but warns their first opponents Italy will pose a tough opening challenge.

"They are a very competitive team and are always very difficult to beat with talents on board such as (Antonio) Cassano or (Mario) Balotelli," says Mata, who will have his work cut out to get a starting berth in the holders' stellar midfield.

"Of course my goal is to play as much as possible. But the competition in the group is very strong - I'll have to work hard to get in there but that's normal - various other players deserve their starting eleven status," he added modestly.

One man who won't be there is injured all-time record scorer David Villa.

"He's scored a lot of goals for his country but I think we have no shortage of firepower in (Alvaro) Negredo (Chelsea clubmate Fernando) Torres and (Fernando) Llorente. Then we have attacking midfielders who can also get on the scoresheet."

As well as making a Euros impression Mata is hoping to round off his summer with Olympic glory.

The 24-year-old said on the sidelines of training at Spain's Polish camp in Gniewino that gold was his dream even if the Euros come as the first challenge.

It will mean a grueling summer for the former Valencia man as the Euros finish on July 1 - when he will be hoping to feature in the final - and the Olympic tournament starts in London on July 26.

But he doesn't mind that.

"I keep thinking that I want to play in the London Games. It's been a great season for me at club level and to be at the Euros is a bonus. My intention is (also) to feature in London and hopefully win gold - that would be a perfect year," Mata told reporters.

Bilbao's Javi Martinez will also be looking to feature in London, as will striker Adrian Lopez, who missed the cut for the Euros. All three already have under 21 age category glory under their belts.

Quite apart from the euros, Spain will be a major threat at the Olympics as the likes of Manchester United keeper David de Gea and Bilbao forward Iker Muniain will also be there.

Barcelona's Sergio Busquets also wanted to be included but his club put their foot down and the Spanish federation was also cold on the idea.

The unassuming Mata is very much a down to Earth figure in London, where he uses the underground and walks around the city without being mobbed everywhere he goes.

After starting out with first modest Oviedo and then having a spell in Real Madrid's B team he came to prominence with Valencia and Chelsea swiftly snapped him up last year.

Comments
Topics mentioned in this article
Football Antonio Cassano Barcelona Juan Mata Chelsea Euro 2012 Alou Diarra Lech Poznan Spain Italy Mario Balotelli
Get the latest updates on India vs Australia Series, check out the India vs Australia Schedule for 2020-21 and Ind vs Aus live score . Like us on Facebook or follow us on Twitter for more sports updates. You can also download the NDTV Cricket app for Android or iOS.