Having missed an opportunity to beat England in their European Championship opener, France is under more pressure than it perhaps expected heading into Friday's match against a revitalized Ukraine. 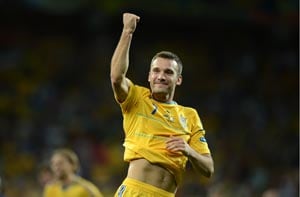 Having missed an opportunity to beat England in their European Championship opener, France is under more pressure than it perhaps expected heading into Friday's match against a revitalized Ukraine.

The France-England game on Monday was billed as a clash between the Group D favourites, but faded into a 1-1 draw, allowing Ukraine to go top with its 2-1 victory over Sweden.

After a shaky start, France dominated but failed to take advantage of its long spells of possession, much to coach Laurent Blanc's frustration.

"We want the players to play their natural game, and we're doing everything we can to help them with that," Blanc said Tuesday. "But there's a difference between what you say and what happens on the pitch. Of course we have to do things differently (against Ukraine)."

That could mean taking more risks early on, rather than sitting back as France did against England, and subsequently going a goal down.

"We reacted well, but it wasn't enough to win the match," Blanc said, hinting that he might tinker with his lineup. "We will make changes if we think there are some players who can bring something more to a game like this. We'll analyze the Ukraine team and there will (possibly) be changes according to that."

Blanc's team faces a tough game in Donetsk, with the tournament's co-host in a state of euphoria and veteran striker Andriy Shevchenko looking like his formidable old self again after scoring with two clinical headers in his team's winning start to the tournament.

"It will be hard after Ukraine's victory against Sweden, and with two goals from the Ukrainian idol - which proves that great players always show up for the big tournaments," Blanc said.

Having won the World Cup on home soil as a member of the France team alongside talismanic playmaker Zinedine Zidane in 1998, Blanc knows exactly how dangerous a team can be when they have a player on form and a country behind them.

"(Shevchenko) gave hope to a whole population," Blanc said. "I'm pleased for him, because he's someone I like a lot."

The 35-year-old Shevchenko is two goals shy of reaching the magical 50 for Ukraine in his last ever tournament, which makes his motivation doubly dangerous. He gave Ukraine the cutting edge France sorely lacked against England, even though Les Bleus boasted a forward line consisting of Real Madrid's Karim Benzema, Bayern Munich's Franck Ribery and Manchester City's Samir Nasri.

Blanc expects Ukraine to attack more than England, which means Benzema should get more space.

"For the beauty of football it's better to watch an open game than a closed game," Blanc said. "I hope Ukraine will have that mentality. They've won their first match and they'll probably be qualified if they win their second. I hope they will take risks."

If Ukraine does go for it, the match is likely to be open and more suited to France's skillful forwards.

Although Benzema threatened late on against England, he was otherwise well contained by center backs John Terry and Joleon Lescott.

"When you're trapped in the claws of Terry and Lescott you have to try and do something to find space, which often means going out wide," Blanc said. "Forwards always need a minimum of room so they can turn and run at defenders. The most important thing is to have a presence in the penalty area when we attack from the flanks."

Nasri scored a good goal against England, but his celebration has prompted some tension between the French media and the team. After scoring, he ran away in celebration and shouted "Shut your mouth" in French. He then brought his finger to his lips as if to tell someone to hush.

The target was a French journalist who wrote an article questioning Nasri's form before the match.

Blanc was asked four times about the incident, which he tried to play down before finally losing patience.

Comments
Topics mentioned in this article
Football France Ukraine Gael Clichy Jeremy Menez Euro 2012 Alou Diarra Lech Poznan Chelsea Rosenborg
Get the latest Cricket news, check out the India cricket schedule, Cricket live score . Like us on Facebook or follow us on Twitter for more sports updates. You can also download the NDTV Cricket app for Android or iOS.