Italy centre-back Giorgio Chiellini's continued participation in the European Championships is at risk due to a hamstring injury. 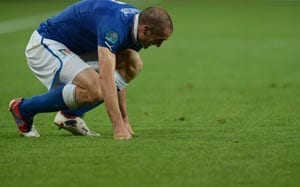 Italy centre-back Giorgio Chiellini's continued participation in the European Championships is at risk due to a hamstring injury.

The 27-year-old limped out of Italy's 2-0 win over Ireland on Monday night and team doctor Enrico Castellacci said afterwards the signs weren't good.

"These injuries never have immediate recovery periods but we'll have to wait for the tests we'll conduct in a couple of days," he said.

Coach Cesare Prandelli was more positive, expressing his belief that Chiellini - as veteran of Euro 2008 and the disastrous 2010 World Cup finals campaign - would make Sunday's quarter-final in Kiev.

"I have faith in our great physios and medical staff to get him ready," he added.

Comments
Topics mentioned in this article
Football Giorgio Chiellini Alou Diarra Lech Poznan Euro 2012 Republic of Ireland Italy
Get the latest updates on T20 World Cup, check out the T20 World Cup Schedule and Live Score . Like us on Facebook or follow us on Twitter for more sports updates. You can also download the NDTV Cricket app for Android or iOS.