The Netherlands began Euro 2012 with a 0-1 defeat at the hands of Denmark on Saturday in Kharkiv and despite heavy criticism in the media the memory of 1988 kept their hopes alive. 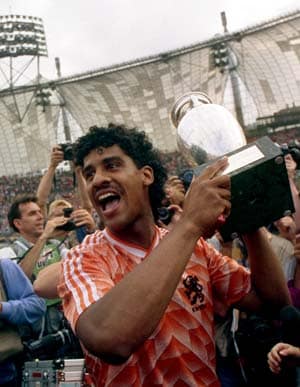 The Netherlands began Euro 2012 with a 0-1 defeat at the hands of Denmark on Saturday in Kharkiv and despite heavy criticism in the media the memory of 1988 kept their hopes alive.

For the first time since 1988 the Dutch lost their opening match of a major tournament. However, after the opening defeat against the erstwhile Soviet Union 24 years ago (1-0) the Netherlands captured its only major title in the end by beating the Soviet Union 2-0 in the final, Xinhua reports.

In an interview with Dutch TV channel NOS Rafael van der Vaart also referred to the 1988 scenario after the loss against Denmark.

"We must remember that and just win the next two matches against Germany and Portugal," Van der Vaart said.

Although the hope is still alive, the media were not positive. "Threat of debacle," the website of the biggest newspaper De Telegraaf wrote. "Title aspirations opportunities wasting Oranje on hold after loss," headed the website of de Volkskrant.

The media were not completely unsatisfied with the performance by the national team. "Oranje did a lot of good things, but forgot to reward itself for a huge field dominance," said de Volkskrant. "The World Cup runners-up missed a lot of whole and half chances"

Bert van Marwijk agreed. "We have had incredible chances to win," he told NOS. "If you get so many chances, you have to score one. You have to score to win. We also were denied a thousand percent penalty." With the latter remark Van Marwijk referred to handball by Lars Jacobsen, which was not punished by referee Damir Skomina.

Arjen Robben and Robin van Persie were most criticised in the media for missing chances. In the starting line-up Premier League top scorer Van Persie was preferred above Bundesliga topscorer Klaas Jan Huntelaar as central striker although most of the Dutch people and media would like to see Huntelaar as deepest striker.

Due to this national discussion the pressure was on Van Persie Saturday and the Arsenal player was not able to prove he is the indisputable No.1 striker in the team.

"In the beginning Van Persie created opportunities for Robben and Sneijder," sports news website NuSport wrote. "But then it seemed as if someone was playing with a voodoo doll. We never saw him messing more with his ball control. After the arrival of Huntelaar he was invisible."

The Dutch debate about the striker position will undoubtedly start all over again in the coming days. The Netherlands needs goals and points in the upcoming matches against Germany and Portugal. To repeat the success on 1988.