Netherlands' coach Bert van Maarwijk on Tuesday insisted that relations in the Dutch camp at Euro 2012 were excellent amid reports of rifts and rival egos clashing. 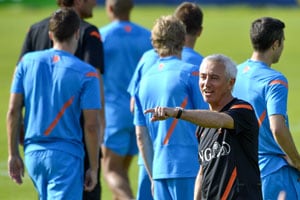 Netherlands' coach Bert van Maarwijk on Tuesday insisted that relations in the Dutch camp at Euro 2012 were excellent amid reports of rifts and rival egos clashing.

Vice-captain Rafael van der Vaart had earlier said he was disappointed at not starting the loss to Denmark and striker Klaas-Jan Huntelaar voiced similar annoyance having seen Robin van Persie preferred up front.

Personality clashes have been a regular Achilles heel for the talented Dutch down the years - but Van Maarwijk insisted that "I can assure you the atmosphere is excellent, despite the tension" generated by the loss to the Danes.

Asked about the noises off from unhappy squad players he insisted: "I don't want to talk about this type of question. Everyone is talking about Van Persie and Huntelaar - it makes you want to laugh, though of course it is somewhat irritating.

"When you lose there are always questions asked in the media. But it's nothing serious," he went on, adding tensions were bound to come to the surface and "this is normal after a defeat."

Van Maarwijk, who guided the Dutch to the 2010 World Cup final where they lost to Spain, insisted that he had confidence in the players ahead of the clash in Kharkiv.

Now the 1988 champions have to go up against early pace-setters and three-time winners Germany on Wednesday.

"I am expecting a very difficult match. The Germans are very strong. But we can beat them.

"How?" I shan't tell you that," said the Dutch handler.

The Germans won a home friendly between the bitter rivals 3-0 last November.

But "the Germans were at home, it was a friendly and we had several players missing. That makes a huge difference."