Italy coach Cesare Prandelli took the unusual step of thanking UEFA president Michel Platini after his side secured qualification for the Euro 2012 quarter-finals. 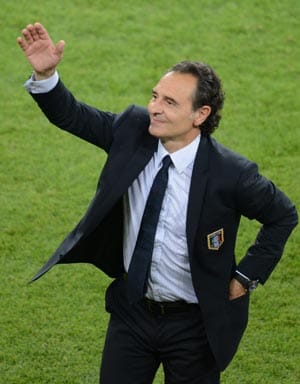 Italy coach Cesare Prandelli took the unusual step of thanking UEFA president Michel Platini after his side secured qualification for the Euro 2012 quarter-finals.

Italy beat Ireland 2-0 on Monday and that coupled with Spain's 1-0 success against Croatia ensured the Azzurri finished second in Group C and will play the Group D winners in the last eight in Kiev on Sunday.

But Prandelli said Italy's first goal, scored by Antonio Cassano with a flicked header from an Andrea Pirlo corner, was thanks to Platini.

"I have to compliment him because without the fifth man maybe the goal wouldn't have been given," said Prandelli mischievously.

He was referring to the UEFA initiative introduced under Platini that saw fourth and fifth officials installed by the goals to help the referee with decisions in the penalty box and in particular in relation to instances when it's not clear whether a ball has crossed the line or not.

Cassano's header had beaten Ireland goalkeeper Shay Given before it was hacked away off the underside of the bar.

At first glance it wasn't easy to see whether or not the ball had crossed the line but television replays showed it was correctly awarded.

Prandelli was responding to a question about a compliment Platini made about his own un-Italian attacking approach.

"I'm surprised by Italy, they play in an attacking way," Platini had joked before Monday's encounter.

"It's amazing, in their last match against Croatia they were 1-0 up but the Croats equalised.

"That's against Italian religion. After the Pope, the religion in Italy is that when you're 1-0 up it's impossible for the opponents to come back," added the former Juventus attacking midfielder.

"The coach Cesare Prandelli makes them play and that's good."

Prandelli took the comment light-heartedly and first replied: "Was it a joke or was he being serious?"

This is the first Euros in which the extra two officials have featured, although it is something that has been used in Champions League football for the last two seasons, and one season longer than that in the Europa League.

Comments
Topics mentioned in this article
Football Michel Platini Euro 2012 Antonio Cassano Alou Diarra Lech Poznan Republic of Ireland Italy
Get the latest updates on India vs Australia Series, check out the India vs Australia Schedule for 2020-21 and Ind vs Aus live score . Like us on Facebook or follow us on Twitter for more sports updates. You can also download the NDTV Cricket app for Android or iOS.