Irish online gaming firm Paddy Power on Tuesday said it would pay the UEFA fine imposed on Denmark's Nicklas Bendtner for flashing the sponsored waistband of his underpants during a goal celebration. 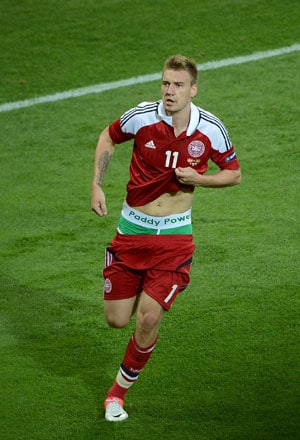 Irish online gaming firm Paddy Power on Tuesday said it would pay the UEFA fine imposed on Denmark's Nicklas Bendtner for flashing the sponsored waistband of his underpants during a goal celebration.

Sunderland forward Bendtner was on Monday slapped with a 100,000-euro (80,000 pounds $126,000) fine and a one-match suspension for the stunt, which happened during last Wednesday's Group B match between Denmark and Portugal.

The punishment has been criticised as excessively harsh, with many detractors pointing out that European football's governing body had issued lesser penalties for more serious offences like violence and racist chanting.

The Dublin-based firm said on its website blog.paddypower.com: "We've decided to foot the bill for the fine. Paddy Power are paying Bendtner's massively over the top 100,000-euro fine."

Spokesman Ken Robertson added: "We don't believe that Nicklas should be penalised for nothing more serious than wearing his lucky underpants which in fairness was only a bit of fun."

UEFA's disciplinary committee imposed the sanction on Bendtner for improper conduct and flouting Law 4 of the Laws of the Games covering players' equipment.

The law states: "Players must not reveal undershirts which contain slogans or advertising. A player removing his jersey to reveal slogans will be sanctioned by the competition organiser.

Article 18.18 of the "Regulations of the UEFA European Football Championship 2010-12" also states: "All kit items worn during the final tournament must be free of any sponsor advertising."

Bendtner can appeal but if he is unsuccessful he will miss Denmark's opening 2014 World Cup qualifier.

Comments
Topics mentioned in this article
Football Alou Diarra Lech Poznan Nicklas Bendtner Manchester City Portugal Euro 2012
Get the latest updates on India vs Australia Series, check out the India vs Australia Schedule for 2020-21 and Ind vs Aus live score . Like us on Facebook or follow us on Twitter for more sports updates. You can also download the NDTV Cricket app for Android or iOS.