PAOK Thessaloniki scored twice in the first 13 minutes against Tottenham before defending with 10 men for almost two thirds of the match to clinch a place in the next round of the Europa League on Wednesday. 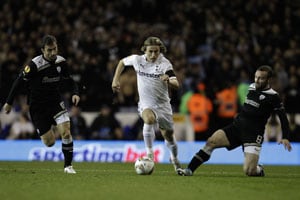 PAOK Thessaloniki scored twice in the first 13 minutes against Tottenham before defending with 10 men for almost two thirds of the match to clinch a place in the next round of the Europa League on Wednesday.

Five other clubs also progressed to the knockout rounds ahead of their final group games.

Former champion Atletico Madrid advanced with a 1-0 win at Celtic, Metalist Kharkiv clinched the point it needed with a 0-0 draw against Austria Vienna, while Braga beat Birmingham 1-0. Standard Liege and Hannover also qualified.

Salpingidis and Athanasiadis both took advantage of sloppy marking from Tottenham's defense to score against the Premier League's third-place club.

Modric scored after Stafylidis was sent off in the 37th for handling on the line but PAOK held out to stay unbeaten, with Pablo Contreras clearing off the line from Spurs' Iago Falque and Jermain Defoe having a late equalizer ruled out for a foul.

PAOK has 11 points from five Group A matches, one more than second-place Rubin Kazan. With Tottenham three points further back, Spurs need a big win at Shamrock Rovers on Dec. 15 and for PAOK to beat Rubin.

Atletico winger Arda Turan scored with a powerful shot after half an hour in Glasgow to end Celtic's 10-game unbeaten streak and ensure progress from Group I for the Spanish side. Udinese is in second place after a 0-0 draw at Rennes - which is eliminated - and can advance if it avoids defeat against Celtic in its final game.

Metalist won Group G despite failing to win for the first time in five matches, leaving AZ Alkmaar needing to win its game against the Ukrainian side to be sure of finishing in second place and progressing ahead of Austria Vienna.

AZ drew 0-0 at Malmo on Wednesday.

FC Bruges needs just a point in its final Group H game after scoring four times in the last 17 minutes to win 4-3 at Maribor, with Ryan Donk atoning for the own goal that had contributed to Bruges being 3-0 down by scoring a last-minute winner for the Belgian club.

Braga has already qualified after Hugo Viana scored in the 50th minute against Birmingham with a strike that deflected off defender Curtis Davies.

Birmingham could have led early but goalkeeper Quim saved Nikola Zigic's penalty kick, leaving the English club needing a victory over Maribor to have any chance of advancing.

Standard Liege beat Hannover 2-0 but even the loser advanced because the other two Group B teams - Vorskla Poltava and FC Copenhagen - could only draw 1-1.

PSV Eindhoven and Legia Warsaw had already advanced from Group C before PSV's 3-0 win over its fellow qualifier. Hapoel Tel Aviv won 3-1 at Rapid Bucharest in the other match.

There are another 12 games scheduled for Thursday, when Lazio, Sporting Lisbon, Paris Saint-Germain and FC Twente are all in action.