Goals in either half from Philippe Mexes and Yoann Gourcuff saw France continue their resurgence under Laurent Blanc as Les Bleus recorded a routine 2-0 win over Luxembourg in Friday's Euro 2012 qualifier. 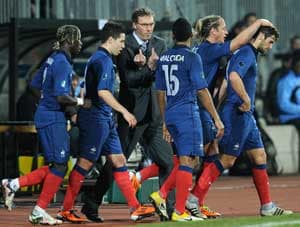 Goals in either half from Philippe Mexes and Yoann Gourcuff saw France continue their resurgence under Laurent Blanc as Les Bleus recorded a routine 2-0 win over Luxembourg in Friday's Euro 2012 qualifier.

Mexes rose high to head in the opener after 28 minutes and after the French had missed numerous further chances to bolster their goal difference it was Gourcuff who steered in the second with 20 minutes remaining to give the French a sixth consecutive victory.

Gourcuff benefited from a low cross by fit again Franck Ribery - with whom he has reportedly patched up differences which lingered from last year's World Cup where a player revolt left French hopes in tatters.

Blanc and company now look to have drawn a line under their World Cup humiliation under his predecessor Raymond Domenech with both Ribery and Patrice Evra back in the fold after serving bans for their roles in the infamous training ground strike in Knynsa, South Africa.

A friendly win over Brazil has further lifted confidence and the traumas of last summer are now clearly receding fast as Blanc, a mainstay of the 1998 World Cup and Euro 2000 champions, rebuilds apace.

Ribery said he was delighted to don the national shirt again and have a hand in the second goal into the bargain.

"I am really proud to be back with the French team. It wasn't an easy game and it wasn't my best ever match, but the main thing was to win it. As for those who whistled me well you just have to deal with that," said the Bayern Munich midfield dynamo with some fans clearly unwilling to forgive or forget the World Cup mutiny entirely.

Striker Karim Benzema, in hot form of late for Real Madrid but drawing a blank Friday, said: "We knew it would be tough and that we wouldn't have that many chances. It wasn't pretty but we got the job done."

After starting out on their Euro campaign with a shock loss to Belarus, France have swiftly got back on the rails and this latest success at the Stade Josy Barthel means they have opened up a four-point lead on their erstwhile conquerors - though the Eastern Europeans have a game in hand.

Belarus travel to Albania on Saturday before hosting the French in early June.

Only the group winners are automatically assured of a place in the Euro 2012 finals in Poland and Ukraine.

Comments
Topics mentioned in this article
Football France Romania Greece Lyon Costa Rica Philippe Mexes Franck Ribery Gianluigi Buffon Yoann Gourcuff AC Milan Euro 2012 Yoan Gouffran
Get the latest updates on ICC T20 Worldcup 2022 and CWG 2022 check out the Schedule, Live Score and Medals Tally. Like us on Facebook or follow us on Twitter for more sports updates. You can also download the NDTV Cricket app for Android or iOS.