Mathijsen back for 1st training since injury

Even fully fit, the Netherlands defense was always going to be the team's soft spot at the European Championship. Struggling with injury makes it even worse. 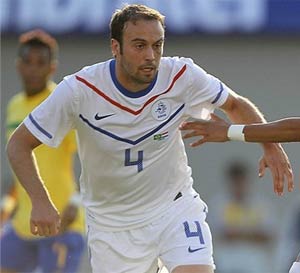 Even fully fit, the Netherlands defense was always going to be the team's soft spot at the European Championship. Struggling with injury makes it even worse.

On Tuesday, central defender Joris Mathijsen only briefly rejoined group training with the team, raising questions about his fitness for Saturday's opening Group B game against Denmark.

And his partner at the heart of defense, John Heitinga, reduced himself to cycling on a stationary bike while his teammates had a light training session. The Everton player warned it was just a bit of rest after a long season.

Mathijsen was finally back on the field Tuesday after a left hamstring injury kept him sidelined for 10 days of vital championship preparations. He was injured during the 2-1 loss to Bulgaria on May 26.

He teamed up with Heitinga in the 2010 World Cup final, where the Dutch lost to Spain, and was the linchpin in defense throughout qualifying. His loss would be a bitter blow for the Dutch as they prepare for the toughest Euro 2012 group, which also includes Germany and Portugal.

Under a steady rain, Mathijsen warmed up with the team and joined in some ball exercises before he was forced to test his hamstring again with individual runs.

Netherlands coach Bert van Marwijk insisted Mathijsen's recovery was going to plan as he would steadily increase training ahead of Saturday's opener in Kharkiv, Ukraine.

So, Heitinga knows how important it is to stick together.

"Clarity and steadfastness is very important to me," he said Tuesday.

It is what the Dutch have been lacking on the defensive wings. Even though Gregory van der Wiel is quickly developing as a sturdy right winger with Ajax, it is the left which is posing the Dutch problems.

Long dominated by Giovanni van Bronckhorst, the position has been up for grabs since his retirement after the 2010 World Cup. Jetro Willems made only his second appearance in the position during Saturday's 6-0 drubbing of Northern Ireland.

Still, Van der Wiel is not downbeat and said the defense has been uniting since the last World Cup.

Comments
Topics mentioned in this article
Football John Heitinga Jetro Willems Joris Mathijsen Euro 2012 Alou Diarra Lech Poznan
Get the latest Cricket news, check out the India cricket schedule, Cricket live score . Like us on Facebook or follow us on Twitter for more sports updates. You can also download the NDTV Cricket app for Android or iOS.