However, Jones is suspended for the return leg after his appeals for a booking against Selcuk Inan saw him earn a yellow card of his own on 35 minutes. 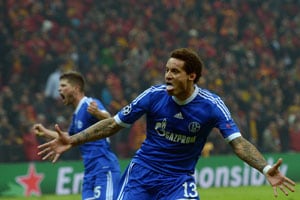 Turkey striker Burak Yilmaz gave Galatasaray an early lead at the Turk Telekom Arena, but US midfielder Jermaine Jones equalised on the stroke of half-time to give Schalke a slim advantage ahead of the March 12 second leg.

"The formula for victory is very simple now: we need to score and win, but it won't be easy," admitted Galatasaray midfielder Nordin Amrabat.

Schalke have now lost just one of their last ten European away fixtures, including victories at Olympiakos and Arsenal, in sharp contrast to their recent Bundesliga form.

After just one victory in their last 12 games, this was a huge improvement by the Royal Blues.

"We are really happy with the result," beamed Jones.

"We made one or two mistakes and conceded the goal, but all together we played well.

"Our goal was important, we'll see how things go from here. We have earned a lot of respect."

However, Jones is suspended for the return leg after his appeals for a booking against Selcuk Inan saw him earn a yellow card of his own on 35 minutes.

"The action which led to my yellow card was dumb from me, I hope I can still play in the quarter-final," he added.

Despite Drogba and Sneijder making their Champions League debuts for the ambitious Turkish club since joining last month from Shanghai Shenhua and Inter Milan respectively, both had quiet games as the hosts failed to dominate.

The game started at a frantic pace with both teams focusing on attack while leaving plenty of space at the back.

"In the first half, the atmosphere was really intense, but it wasn't so bad after the break," said Schalke goalkeeper Timo Hildebrand.

"We can still be real spoilsports, Schalke are a competition team.

"Even when things go to pot, we're still there."

The hosts took the lead when Yilmaz, with a superb first touch, flicked the ball with his heel over marker Benedikt Hoewedes and slammed his shot past Hildebrand after just 12 minutes.

The Germans had their chances as Hoewedes' header found Dutch striker Klaas-Jan Huntelaar, back in the side after a two-week break with a burst blood vessel in his left eye, but he could not stab the ball over the line.

Ex-Schalke midfielder Hamit Altintop hammered the underside of the cross bar for Galatasaray in a busy opening period while Schalke's Jefferson Farfan was only denied when defender Semih Kaya turned his shot around the post.

Having been booked, Jones redeemed himself when he converted a brilliant pass from Farfan to hit the back of the net after a fast break for the equaliser on 45 minutes which will be invaluable in the return leg.

Schalke had a let off with 25 minutes left when Drogba put Yilmaz in a great position, but Hildebrand blocked the shot just as the offside flag went up.

Huntelaar smashed a shot over the bar with 75 minutes before making way for Finland's Teemu Pukki, while both Yilmaz and Sabri Sarioglu both tested Hildebrand at the other end.

With Borussia Dortmund having earned a 2-2 draw at Donetsk and after Bayern Munich's impressive 3-1 win at Arsenal on Tuesday, all three Bundesliga clubs now have a strong chance of making the quarter-finals.