Ireland striker Jonathan Walters will need luck to get into Giovanni Trapattoni's starting lineup, but he knows just how fortunate he is to be a part of the country's Euro 2012 adventure. 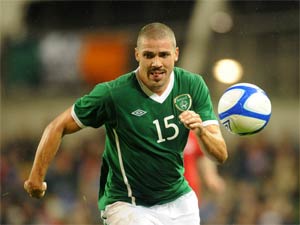 Ireland striker Jonathan Walters will need luck to get into Giovanni Trapattoni's starting lineup, but he knows just how fortunate he is to be a part of the country's Euro 2012 adventure.

Compared to many of the players at the championship, the 28-year-old has taken an unorthodox route to Poland and Ukraine.

The Stoke City forward started his career in the youth and reserve teams of Blackburn Rovers, but never made an appearance for the first team.

His undoubted ability saw him earn a move to Bolton, where he made four Premier League appearances, but he again failed to produce consistently and slipped out of the top flight.

This began a winding road through the lower levels of English football, stopping at Hull City, Crewe, Barnsley and Wrexham along the way.

Just five years ago, he was at the bottom of the league pyramid, playing for League Two side Chester, before he was snapped up by Ipswich Town where he eventually became captain and earned a £2.75m move to Stoke City.

Now an established Premier League striker, and a regular in an Ireland squad replete with attacking options, the English-born star - who qualifies to play for Ireland through his Irish mother - is at the top of his profession.

But having had to fight his way up the ladder, he knows things could be so different.

"We're in such a privileged position and as a player who's been down the leagues a few years ago you would not have dreamt that it would happen," he said after Ireland's first training camp in Poland on Tuesday.

"We're privileged to be where we are and you have to enjoy it and not take anything for granted.

"Some people - some top, top players never play in a tournament.

"I know the other end of the scale, where lads are dropping out of the leagues.

"I've a friend I've known since he was a young lad, and he got a bad knee injury last year, and after his operation, he's signed back part-time with Chester and he's doing University too.

Walters is one of few Premier League players to have played in all four English leagues, and that experience has not only taught him humility - it's also given him reason to never lose faith.

With Kevin Doyle the undoubted first choice partner of skipper Robbie Keane, it would be easy for a substitute striker to throw the towel in.

However, Walters has been increasingly impressive off the bench in his six caps since being given his debut in 2010 by Trapattoni.

His strength, pace and versatility has put him in line for a shock start should Trapattoni alter his 4-4-2 formation, and the Merseyside-born player is ready should an opportunity arise.

"From where I came from a few years ago, you have to aim high and hope for the best," Walters conceded.

"If you're on the bench you've got to approach it that you could come on in the first minute.

"You've got to do your warm-ups and be ready to go because that can happen in any game.

"Of course I want to play, ask any of the strikers, we want to play," he added, "and hopefully with three games in the group, I'll manage to get some game time.

"Someone can get injured, so you can get in that way, you always need to be ready.

"A sub always want to come on and make an impact, be it me, Simon (Cox), Shane (Long) - whoever is playing.

"All the other boys are behind whoever else is starting."

Comments
Topics mentioned in this article
Football Euro 2012 Alou Diarra Lech Poznan Ireland Cricket Team Jonathan Walters
Get the latest updates on Fifa Worldcup 2022 and check out  Fifa World Cup Schedule, Stats and Live Cricket Score. Like us on Facebook or follow us on Twitter for more sports updates. You can also download the NDTV Cricket app for Android or iOS.