Danish goalkeeper Thomas Sorensen will miss the Euro 2012 in Poland and Ukraine due to a back injury, the Danish Football Association said Tuesday, adding that the son of legendary Peter Schmeichel will take his place. 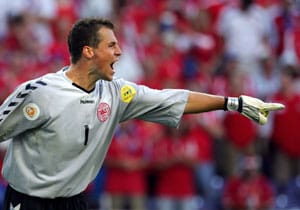 Danish goalkeeper Thomas Sorensen will miss the Euro 2012 in Poland and Ukraine due to a back injury, the Danish Football Association said Tuesday, adding that the son of legendary Peter Schmeichel will take his place.

"Coach Morten Olsen has decided that the national team's first goalkeeper, Thomas Sorensen, will not go to the Euro finals due to the back injury he suffered during the match against Brazil on Saturday afternoon," the association said in a statement, adding that Kasper Schmeichel would take Sorensen's place.

Uncertainty surrounding the extent of the injury Sorensen, the Stoke City number one, suffered during the game in Hamburg had led to the decision, the statement said, pointing out that Olsen wanted to go the the Euro 2012 certain that he had three fit keepers.

Sorensen suffered his injury while trying to ward off Brazil's second goal on Saturday, and was substituted. Denmark went on to lose the friendly 3-1.

"This is a heavy decision to make, and it is a serious hit for us on a sports level," Olsen said in the statement.

"Thomas is, for starters, a fantastic and professional person to have on the team, and his routine is exactly what we need in a finals against some of the best teams in the world," he said.

Sorensen himself said in the statement that he was "deeply unhappy" over the decision, which meant he would miss his fifth major championship in the past 11 years.

But he also he understood "that it is a big risk to go in with an injured goalkeeper even before the finals kick off, so I respect Morten's decision, even if it hurts".

He pointed out that he would soon be celebrating his 36th birthday.

"Many may be asking whether this is the end of my career with the national team. I have the summer to reflect on that, but my first thought is that I am ready to fight for the goalkeeper's shirt after the summer break."

Kasper Schmeichel, who plays for Leicester City, will thereby join Denmark's national team for the Euro championships 20 years after his father Peter's triumph in 1992.

He will join the team's training as of Wednesday afternoon, the Danish football association said.