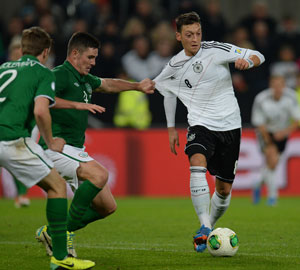 Germany booked their place at the 2014 World Cup with a convincing 3-0 win over the Republic of Ireland on Friday.

Second-placed Sweden's 2-1 win at home to Austria leaves Group C winners Germany five points clear ahead of their final qualifier against the Swedes in Stockholm on Tuesday.

The win leaves Germany unbeaten in their last 31 qualification matches for either a World Cup or European Championships dating back to their 3-0 defeat to the Czech Republic in October 2007.

Irish goalkeeper David Forde of Millwall had a busy night as Germany fired in 28 shots compared to the guests 12.

With both strikers Miroslav Klose and Mario Gomez injured, coach Joachim Loew opted to start Ozil up front and the central midfielder struggled on occasion before adding the late third goal.

After Italian great Giovanni Trapattoni resigned last month with his side having no chance of qualifying, caretaker coach Noel King brought a defence-minded Ireland side to Cologne.

Having trounced the Irish 6-1 in Dublin last October, the guests clearly wanted to avoid another thrashing and packed their defence whenever the Germans attacked.

The famous luck of the Irish deserted them after only 12 minutes when Sami Khedira's shot took a wicked deflection off Irish centre-back Ciaran Clark, leaving goalkeeper Forde sat on his backside.

Both right wing Thomas Mueller and Schuerrle on the left tested Forde further with first-half chances.

Celtic striker Anthony Stokes, in for injured Irish captain Robbie Keane, squandered a golden chance just before the half-time whistle when he failed to connect after the ball came off the woodwork.

The hosts rode their luck early in the second-half when Germany goalkeeper Manuel Neuer, way off his line, challenge Stokes to a long ball just inside his own half.

The Irishman sprinted clear but with the German defence scrambling, Stokes could only fire over the empty goal.

The Germans doubled their lead when central midfielder Toni Kroos chipped the defence to find Schuerrle onside and the Chelsea winger fired past Forde on 58 minutes.

Vice-captain Bastian Schweinsteiger was only denied a third after a fine save from Forde from 17 metres out.

Kelly's Ireland kept fighting as Neuer blocked both Stokes and Seamus Coleman in the final 10 minutes and the travelling fans could be heard belting out 'Fields of Athenry' in the dreary Cologne evening.

Clark forced Neuer into a reflex save in the dying stages with a bullet header from a corner before Ozil added the third in the 92nd minute after a superb pass from Kroos.

Comments
Topics mentioned in this article
Xabi Alonso Mesut Özil Andre Schurrle Football Chelsea Czech Republic Germany FIFA Euro 2012
Get the latest updates on ICC Women's Cricket World Cup 2022 and IPL 2022, check out the Schedule , Live Score and IPL Points Table. Like us on Facebook or follow us on Twitter for more sports updates. You can also download the NDTV Cricket app for Android or iOS.