A group of France under-21 players picked up lengthy international bans on Thursday as punishment for breaking a night-time curfew between two key European championship qualifiers last month. 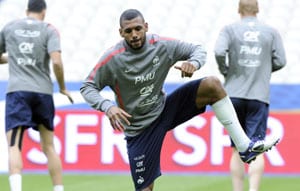 A group of France under-21 players picked up lengthy international bans on Thursday as punishment for breaking a night-time curfew between two key European championship qualifiers last month.

The stringent punishments were handed down by the French Football Federation's disciplinary committee.

The group's nocturnal antics were first unveiled by L'Equipe, the French sports daily, which revealed that the players defied team orders and left the France under-21 base in the northern city of Le Havre to go to a Paris nightspot on the night of October 13/14.

The team had beaten Norway 1-0 the previous evening in a Euro 2013 play-off but suffered a heavy defeat at the hands of the Scandinavians 5-3 on Tuesday. France coach Erick Mombaerts was sacked after the loss.

The FFF had previously warned Mvila about his future conduct after he refused to shake then-France coach Laurent Blanc's hand when he was substituted during the national side's quarter-final clash with Spain in Euro 2012.

For Mvila Thursday's ruling effectively rules him out of taking part in the 2014 World Cup finals, should France qualify.

Comments
Topics mentioned in this article
Euro 2012 Antoine Griezmann Yann M'Vila France Football Chris Mavinga
Get the latest Cricket news, check out the India cricket schedule, Cricket live score . Like us on Facebook or follow us on Twitter for more sports updates. You can also download the NDTV Cricket app for Android or iOS.