Theo Walcott praised England's attacking spirit after inspiring the fightback which helped his team to victory over Sweden. 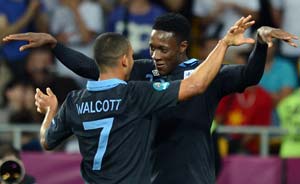 Theo Walcott praised England's attacking spirit after inspiring the fightback which helped his team to victory over Sweden.

The Arsenal winger proved to be the decisive figure in a rollercoaster 3-2 win over the Swedes which left England needing only a point from their final Group D game against Ukraine next week to advance to the quarter-finals.

Walcott rose from the bench to replace the ineffectual James Milner on 64 minutes and lashed in England's equaliser to make it 2-2 within a minute.

The Arsenal winger then skipped past the Swedish defence to set up Danny Welbeck's dramatic winner 12 minutes from time.

"We felt from the first game we wanted to pick it up a bit more offensively and to score three goals is the main thing," Walcott said.

"It's always nice to come off the bench and show what you can do.

"I've obviously been disappointed that I haven't played, but I've been training hard and it's not about the starting line-up, it's a whole squad thing.

"I was sharp warming up and you need to be sharp on the pitch because at this level it's really, really tough. To make my first appearance in such a high-profile arena means so much because it's been a long time waiting."

The 23-year-old's first goal in a major tournament comes six years after he was taken to the 2006 World Cup as a teenage prodigy by then manager Sven-Goran Eriksson before leaving the finals without a single minute of game-time.

England manager Roy Hodgson, who earlier this month suggested Walcott had benefited from multiple chances to establish himself in the team, insisted he had never doubted the winger's ability.

"Of course I believed in him, of course I believe he's a good player. He's got good qualities - that's why I selected him in my group of 23," Hodgson said. "I was delighted with his performance tonight."

As well as praising Walcott's role in England's winner, the England manager also applauded the deft flicked finish from Welbeck which clinched the win.

"It was a good move," Hodgson said. "I thought we got the ball behind their left back with a good pass and Theo was able to skip away from him.

"I thought he showed a lot of composure to find Danny at the near post and Danny timed his run to the near post.

"It was a very clever finish with a type of pirouette that made it very difficult for the goalkeeper, who I guess expected him to try and toe it towards the near post. But he was able to pirouette and beat him at the far post.

"It was a goal well worthy of winning the game."

Welbeck meanwhile revealed England were unhappy to have conceded two goals which almost cost them the game.

"I'm happy with the finish and to get the three points, but it's quite disappointing to let two goals in at the start of the second half," Welbeck said.

"We'll get back to Poland, get our recovery done, and obviously turn our attention to the Ukraine. We'll go on from there and try to get three more points."

Comments
Topics mentioned in this article
Alou Diarra Lech Poznan Arsenal Udinese Wayne Rooney Euro 2012 England Cricket Team West Indies Cricket Team Australia Cricket Team Sweden James Milner Football
Get the latest updates on India vs Australia Series, check out the India vs Australia Schedule for 2020-21 and Ind vs Aus live score . Like us on Facebook or follow us on Twitter for more sports updates. You can also download the NDTV Cricket app for Android or iOS.