The Ukraine v France Euro 2012 Group D match resumed at 1700GMT after a 57 minute suspension because of torrential rain here on Friday. 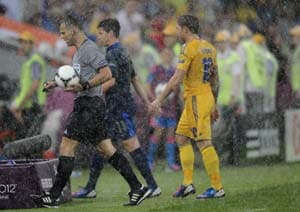 The Ukraine v France Euro 2012 Group D match resumed at 1700GMT after a 57 minute suspension because of torrential rain here on Friday.

The Dutch referee Bjorn Kuipers ordered the teams off five minutes into the game with a violent thunderstorm raging around them.

However, after the rain died down Kuipers inspected the pitch with UEFA officials and with the ground staff working overtime to soak up the surface water he declared it fit to play on.

Earlier, Laurent Blanc made two changes to his France line-up for the game against Ukraine, with Gael Clichy and Jeremy Menez both coming into the team for the Group D match.

Alou Diarra retained his place in central midfield despite competition from the fit-again Yann M'Vila, while Samir Nasri looked set to adopt a central playmaking role after his man-of-the-match turn in the 1-1 draw with England.

After claiming both goals in Ukraine's opening 2-1 victory over Sweden in Kiev, national icon Andrei Shevchenko held on to his place up front alongside former Liverpool striker Andrei Voronin.

Despite having hinted that he might make changes to his starting line-up, Ukraine coach Oleg Blokhin kept faith with the 11 players who started the win against Sweden.

Starting line-ups for the Euro 2012 Group D match between Ukraine and France at Donbass Arena here on Friday:

Comments
Topics mentioned in this article
Football France Gael Clichy Jeremy Menez Euro 2012 Alou Diarra Lech Poznan Ukraine
Get the latest Cricket news, check out the India cricket schedule, Cricket live score . Like us on Facebook or follow us on Twitter for more sports updates. You can also download the NDTV Cricket app for Android or iOS.