Russia will look to cement their place in the last eight at Euro 2012 here on Saturday when a draw will suffice in their game with Greece. 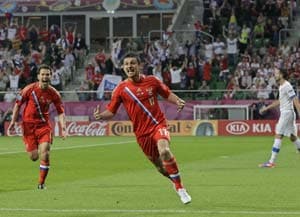 Russia will look to cement their place in the last eight at Euro 2012 here on Saturday when a draw will suffice in their game with Greece.

They will hope their fans are on much-improved behaviour as any transgressions could result in their suspended six points deduction from the next Euro qualifiers being imposed by UEFA.

Russia top the group on four points with Greece needing to beat them to have any chance of progressing while Czech Republic, on three, meet co-hosts Poland, who have two points, also on Saturday.

In the wake of their 4-1 demolition of Czech Republic in the opening game last Friday, Russia had been expected to storm into the last eight when they faced co-hosts Poland in Warsaw's National Stadium on Tuesday.

But the Poles forced a 1-1 draw, meaning that while the odds remain stacked in favour of Dutch veteran Dick Advocaat's men, they know they cannot afford to be complacent.

"Of course a draw with Greece will also put us into the knockout stage but we should win and stay in Warsaw. Any other result will be unacceptable," said Zenit Saint Petersburg midfielder Roman Shirokov.

That was echoed by goalkeeper Vyacheslav Malafeev, who like Shirokov is one of seven Zenit players who started both games.

"We also need to forget that a draw will also put us into the knockout stage and score. Once, twice... as much as we can," Malafeev said.

Advocaat, who took over from compatriot Guus Hiddink in May 2010, has won plaudits for building a side with attractive, free-flowing play and blooding impressive young players such as CSKA Moscow's Alan Dzagoev.

The 21-year-old has scored three goals so far at Euro 2012, getting a double against the Czechs and one in the Polish match.

For Advocaat, success at Euro 2012 would be a fine parting gift before he steps down after the tournament to return to club management in his homeland at PSV Eindhoven.

Hanging over his successor is the spectre of a six-point deduction from Russia's Euro 2016 qualifying campaign in the event of further serious crowd trouble involving its fans.

European football's governing body UEFA issued the warning with a 120,000-euro ($150,000, 96,000-pound) fine, after Russian fans lit and threw fireworks during their side's win over the Czechs.

While Russia look set to cruise into the knock-out stages, the picture is very different for Greece, who lie at the foot of Group A.

The surprise Euro 2004 champions will be looking for an inspired performance similar to the one that saw them battle back from being a goal down and a man down to draw 1-1 with Poland in their opening game - though this time they have to win.

The Greeks, hoping to bring some cheer to a homeland locked in an economic and political crisis, come into the Russia match on the back of a 2-1 defeat to the Czechs on Tuesday.

"There is a chance and we have to focus and believe that it is possible," their Portuguese coach Fernando Santos said.

Cycling Ace Mark Cavendish Opens Up About Battle With Depression