FIFA boss Sepp Blatter said on Wednesday that the introduction of goal-line technology is a must after Ukraine appeared to equalise against England in their final Euro 2012 group match but the referee waved play on. 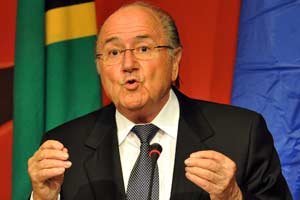 FIFA boss Sepp Blatter said on Wednesday that the introduction of goal-line technology is a must after Ukraine appeared to equalise against England in their final Euro 2012 group match but the referee waved play on.

"After last night's match #GLT is no longer an alternative but a necessity," the president of football's world governing body Sepp Blatter wrote on the micro-blogging site Twitter.

Blatter has frequently stated his position in favour of technology to determine disputed decisions, setting him at odds with his counterpart at European football's governing body UEFA, Michel Platini.

Platini this week told reporters in Warsaw that the five officials currently being used in Euro 2012, including two on the goal-line, would prevent any repeat of controversial incidents.

He again said that technology was a slippery slope towards its use for every decision, including off-side and handball.

But the five officials at co-hosts Ukraine's final group D match with England in Kiev on Tuesday were under scrutiny after Marko Devic forced a save from Joe Hart in the 62nd minute and John Terry cleared off the line.

Television replays suggested that the ball had crossed the line for a goal but Hungarian referee Viktor Kassai waved play on.

"The result of the match turned on a gross error by the officials who didn't give the Ukrainian goal," Ukraine's Sport-Express newspaper said on its website on Wednesday.

"And it all happened with five officials, two of whom were in charge of seeing whether a ball crosses the line."

It had not been the case the previous evening when Italian striker Antonio Cassano benefited from a sharp-eyed fifth official who correctly called that his header had crossed the line in the 2-0 win against Ireland.

FIFA is currently trialling two prototypes of goal-line technology, one from British firm HawkEye, which uses a series of cameras in stadium roofs to track the trajectory of the ball and another from German firm GoalRef, which uses sensors.

Both have been tested in match conditions in recent months, with monitors observing the performance of HawkEye during England's pre-Euro 2012 warm-up game against Belgium at Wembley stadium.