A partisan home crowd isn't the only thing France has to keep quiet when it plays Ukraine at the European Championship on Friday. 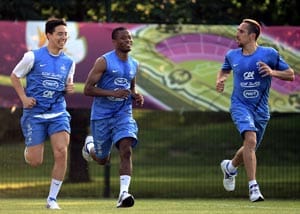 A partisan home crowd isn't the only thing France has to keep quiet when it plays Ukraine at the European Championship on Friday.

A resurgent Andriy Shevchenko has shrugged off a combination of back pains and criticism to steal the spotlight at the tournament, scoring two superb headers to give Ukraine a 2-1 win over Sweden in their opening Group D match.

The 35-year-old Shevchenko's time on the highest stage is almost up because he will retire from international duty at the end of Euro 2012. Yet a win for the co-hosts will guarantee the team a spot in the quarterfinals and extend the striker's international career by at least one more match.

"We really have a good chance to make it out of this group," said Shevchenko, who has scored 48 goals for Ukraine. "That's why we cannot fall victim to the euphoria."

Try telling that to the fervent fans who will turn the Donbass Arena in Donetsk into a blue-and-yellow wall of noise.

The fact that Shevchenko plays for Donetsk's archrival, Dynamo Kiev, will melt into insignificance, much the same way as the 1,000 French fans expected to turn up will hardly be noticed. They were barely audible against England.

"It's going to be hard against Ukraine. They will be very motivated and have the crowd on their side," France right back Mathieu Debuchy said. "But we were already prepared for that."

France had better be ready, because a loss will leave the team perilously close to a third straight first-round elimination at a major competition following early exits at the 2010 World Cup and Euro 2008. The French drew 1-1 with England in their first match.

Ukraine was the team tipped to struggle in Group D.

Reports before the tournament started were of a team in disarray, and coach Oleg Blokhin was heavily criticized for standing by the aging Shevchenko, who scored 127 goals in 226 Serie A matches for AC Milan from 1999-2006 before his career started to fade.

"I was not surprised at all by his performance (against Sweden)," Blokhin said through a translator. "I couldn't understand why he was written off before the tournament."

The early win has not fooled Shevchenko or any of his teammates into dismissing the French threat. Laurent Blanc's team is unbeaten in 22 matches and is a far more technically assured than Sweden.

"The French team plays football differently and does more with the ball than the Swedish team," veteran Ukraine striker Andriy Voronin said. "One chance could decide the game."

Where Sweden's attack relied heavily on Zlatan Ibrahimovic, the French spread the play out more to the wings, with a dangerous front three of Samir Nasri, Karim Benzema and Franck Ribery offering pace, movement and goals. Nasri scored against England, while Benzema scored two and made one for Ribery in the final warm-up game against Estonia. Ribery set up one of Benzema's goals in that match.

Nasri has found himself caught up in the middle of a media frenzy back home - although it has not yet affected the rest of the team.

Nasri's reaction after scoring France's goal against England was to shout "Shut your mouth" at a French journalist and then make a "shhhhhhh" gesture with his finger over his mouth. The journalist had been critical of him the day before.

"I know him very well. I know how much he cares about the France team," Le Graet said. "He really wants to do well. He played and scored. You might question his reaction, but he is a talented player who has earned his place in the team."

There might be one change to France's team, with Yann M'Vila back to full fitness after recovering from a sprained ankle. He could replace Alou Diarra in central midfield.

France beat Ukraine 4-1 the last time the teams met at the Donbass Arena, in a friendly match last year. That night, the home fans seemed disinterested. Friday's game promises to be so much different.

Comments
Topics mentioned in this article
Football Chelsea Rosenborg France Ukraine Gael Clichy Jeremy Menez Euro 2012
Get the latest Cricket news, check out the India cricket schedule, Cricket live score . Like us on Facebook or follow us on Twitter for more sports updates. You can also download the NDTV Cricket app for Android or iOS.