Spain centre-back Sergio Ramos says preparations for the Euro 2012 final against Italy are complicated by the fact his side do not know how their opponents will play. 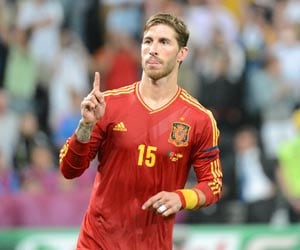 Spain centre-back Sergio Ramos says preparations for the Euro 2012 final against Italy are complicated by the fact his side do not know how their opponents will play.

Sunday's match in Kiev will be a re-run of the opening Group C match between the sides in Gdansk three weeks ago, which finished in a 1-1 draw.

However, whereas Italy lined up in a 3-5-2 formation on that day, they have since reverted to a more classically Italian 4-3-1-2 system, as in Thursday's 2-1 semi-final victory over Germany.

Amid such uncertainty, Ramos says Spain's main priority should be to concentrate on their own approach to the game.

"They changed their style for the first game and for the following matches they changed back to their normal style," said the Real Madrid defender.

"Which style do I prefer? It's a question of keeping calm and waiting to see how they behave on the day. It's important for Spain to remain faithful to our philosophy and to our own style of play.

"We're not obsessed by how Italy will play. We'll wait and see on Sunday."

Despite not knowing how Italy coach Cesare Prandelli will set his team out, Ramos says he and his team-mates took several things on board during the group-stage encounter between the sides.

"It's always good to know your opponents," he said.

"You can learn from the matches, learn about the opposition, and learn from your own mistakes. Italy may change their strategy but Spain will play at our best level and do the best that we can.

"Italy are a top team with some great players. They focus on playing at speed and counter-attacking, and they have great players like Andrea Pirlo, but we will do our best to win."

Spain are bidding to become the first country to win three major international tournaments in a row, having previously triumphed at Euro 2008 and the 2010 World Cup.

Victory would therefore galvanise their position in the pantheon of the great international teams, but Ramos appeared to want to play down expectations when he spoke about the importance of winning the final.

"We're very motivated by the possibility of setting a new record by winning the trophy," he said during a press conference on Thursday.

"But we also want to enjoy the moment. Even if we lose, we've already made history just by reaching the final. Winning would be the cherry on the cake.

"Spain as a country can be very proud, whatever happens on Sunday, but the goal is obviously to win and return to Spain with our heads held high."

The encounter at the Olympic Stadium will pit Ramos against his former Real Madrid team-mate Antonio Cassano, whose career was placed in jeopardy after he had to undergo surgery last November to correct a heart defect.

He has since returned to play a leading role in Italy's march to the final and although he will be plotting how to outwit Ramos on Sunday, the Spain centre-back is pleased to see his old club-mate back in action.

"I had the opportunity to enjoy his quality and technique when we played together," said Ramos, who played with Cassano between 2006 and 2007.

"It was marvelous just to watch him train. Since his operation I've been in touch with him and I'm very, very happy to see him recovered and playing well, and proud to have him as a friend."

Comments
Topics mentioned in this article
Euro 2012 Italy Spain Andrea Pirlo Gianluigi Buffon Antonio Cassano Alou Diarra Lech Poznan Football
Get the latest updates on India vs Australia Series, check out the India vs Australia Schedule for 2020-21 and Ind vs Aus live score . Like us on Facebook or follow us on Twitter for more sports updates. You can also download the NDTV Cricket app for Android or iOS.