Denmark claimed the first upset of Euro 2012 by overcoming a badly misfiring Netherlands side 1-0 in their opening Group B match at Metalist Stadium here on Saturday. 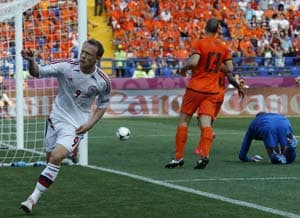 Denmark claimed the first upset of Euro 2012 by overcoming a badly misfiring Netherlands side 1-0 in their opening Group B match at Metalist Stadium here on Saturday.

Brondby forward Michael Krohn-Dehli claimed the game's only goal mid-way through the first half, as Denmark avenged their opening-game loss at the 2010 World Cup and recorded a first win over the Dutch since 1967.

Defeat already compromises the Netherlands' chances of progressing to the knockout phase, with games against Germany and Portugal still to come in the competition's most unforgiving group.

Beaten finalists at the World Cup and top scorers in qualifying, the Dutch entered the tournament among the favourites but their hopes of success in Poland and Ukraine may now hinge on Wednesday's encounter with Germany.

"This is the game," rued Dutch coach Bert van Marwijk.

"We were really determined and I thought that we played even better than our opponents, but you have to score that goal."

Denmark, meanwhile, will advance with renewed belief that they can emulate their shock Euro triumph from 1992, particularly as they finished above forthcoming opponents Portugal in qualifying.

At the age of 18 years and 71 days, Jetro Willems became the youngest ever player to grace a European Championship but the Dutch left-back showed no early nerves and saw a shot from 20 yards narrowly clear the crossbar.

Maarten Stekelenburg was the first goalkeeper called into action, as he comfortably claimed a header from Danish captain Daniel Agger, but gradually the Danes were forced deeper and deeper into their own territory.

Ibrahim Afellay, Robin van Persie and Arjen Robben all threatened on multiple occasions, while the latter saw a low cross cut out by Lars Jacobsen after electing not to reward van Persie's through ball with a shot.

It was therefore against the run of play that Denmark broke the deadlock, in the 24th minute, as Krohn-Dehli sold John Heitinga a dummy inside the box before tucking the ball between Stekelenburg's legs.

The goal brought Holland coach Bert van Marwijk to the edge of his technical area and it was from there that he saw Robben strike the base of Denmark's right-hand post after pouncing on goalkeeper Stephan Andersen's loose pass as the 1988 champions roused themselves.

Wesley Sneijder set up van Persie for what looked certain to be the equaliser shortly before the interval, but for once the Arsenal man's touch let him down and his shot was blocked by the advancing Andersen.

The Netherlands had 12 shots off target in the first half and their struggle for precision continued in the second, with van Persie tripping over his own feet after being put through in the early stages.

Spurned chances continued to come and go at an alarming rate for the Dutch, while Krohn-Dehli had Stekelenburg scrambling with a low shot at the other end.

Van Marwijk chose to act by introducing Klaas-Jan Huntelaar and Rafael van der Vaart from the bench, and the Schalke striker almost made an immediate impact, collecting Sneijder's fine pass but being bravely denied by Andersen.

A strong handball appeal against Jacobsen brought the Dutch substitutes charging from the dug-out, arms aloft, in the 89th minute but there was to be no late reprieve for van Marwijk's men.