Like the Champions League, there have been instances in European football championship as well where goal keepers like Lev Yashin, in 1960 and Antonios Nikopolidis have won it for their teams. 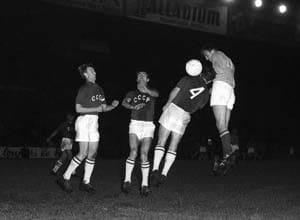 It has been a season of brilliant European club football. A season, where teams have played brilliantly yet lost. Resilient Chelsea in Champions league have dug deep to keep their team alive when it seemed even the odds were stacked up against it.Â  Chelsea goalkeeper Peter Cech has been rock solid at the back, a man who made innumerable saves in the semi-finals and finals to keep his team in contention. Like the Champions League, there have been instances in European football championship as well where goalkeepers like Lev Yashin, in 1960 and Antonios Nikopolidis have won it for their teams.

The European Football championship commonly known as the EURO will start from June 8 in Poland and Ukraine. 16 teams will battle it out to be crowned the undisputed kings of Europe. Spain, winners of the 2008 edition, are the favourites again to win the tournament.

The tournament which was first played in 1960 was the brainchild of Henri Delaunay, a French football player and administrator. He mooted the idea for the first time in 1927. Delaunay for long had been advocating for a major football tournament for the European nations on the lines of the South American Copa America which started way back in 1916. The Frenchman who was on the FIFA board could not convince his colleagues and the world football governing body decided to pursue its dream for a World Cup. Delaunay died in 1955. He did not live to see his dream come true when France hosted the tournament for the first time.

The first European Nations Cup, as it was originally known, was by no means a success. Only 17 countries played the tournament with major footballing giants like England, West Germany and Italy giving it a miss.

Spain after thrashing Poland 7-2 in the qualifying round was drawn against erstwhile USSR in the quarter finals. The match was to be played over two legs - home and away. Politics however, came into play and Spain forfeited both legs after refusing to play against USSR. The decision was taken as the Communists had supported the Second Spanish Republic in the Spanish Civil War. Hence the tie was awarded to USSR who then took on Czechoslovakia.

Hosts France met Yugoslavia in the semi-finals, while USSR took on Czechoslovakia.The French who were playing without their star striker Just Fontaine were leading 4-2 with just quarter of an hour to go. Yugoslavia fought back and scored 3 goals to beat the French. In the other semi finals which was played in Marseille was pretty one sided with Russia's legendary goalkeeper Lev Yashin leading the team to beat the Czechs 3-0.The final which was played in Paris was a close affair with Soviet Union snatching the winner inextra time to beat Yugoslavia.

The stage is set and with just a week for the tournament to start, there would be magical moments, heart breaks and football which we all hope would be entertaining and remembered for years to come.

Comments
Topics mentioned in this article
Football Euro 2012 Alou Diarra Lech Poznan
Get the latest updates on IPL 2021, IPL Points Table , IPL Schedule 2021 , live score . Like us on Facebook or follow us on Twitter for more sports updates. You can also download the NDTV Cricket app for Android or iOS.