England's Smalling out of Euros with groin injury

England defender Chris Smalling will miss the European Championship because of a groin injury he sustained during a Manchester United match, the club's manager Alex Ferguson said on Friday. 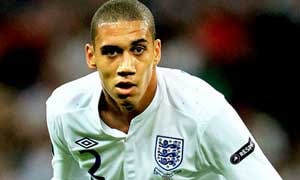 England defender Chris Smalling will miss the European Championship because of a groin injury he sustained during a Manchester United match, the club's manager Alex Ferguson said on Friday.

Ferguson said Smalling got injured during last weekend's victory over Swansea. He said the player "has suffered a bad injury. It is a groin muscle injury and he will miss the European Championship."

United teammate and a France international Patrice Evra said there is an upside to Smalling's injury with the French side facing England in their Euro 2012 opener on June 11 in Ukraine.

"You always have to find the silver lining," Evra said. "It's a huge blow for United. Chris is one of the strongest defenders in our squad. I'm really sad for him but, to be fair, I'm happy he won't play against me and France in the Euros.

"I have to be honest. When he told me he was injured and would miss the game against Sunderland I said, 'No, Chris, we need you.' And then he told me he'd also miss the Euros and I just said, 'Thanks! Well done.'"

While United striker Danny Welbeck will miss Sunday's Premier League finale at Sunderland with an ankle injury, manager Alex Ferguson said the England international should be fit for Euro 2012.

England coach Roy Hodgson is due to name his Euro 2012 squad on Wednesday.