Norwich goalkeeper John Ruddy has been forced to withdraw from England's Euro 2012 squad after suffering a broken finger. 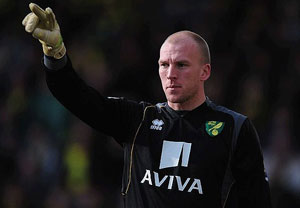 Norwich goalkeeper John Ruddy has been forced to withdraw from England's Euro 2012 squad after suffering a broken finger.

Ruddy, who has yet to win his first senior England cap, had been expected to compete with West Ham's Robert Green for the right to be the main back-up to established number one Joe Hart.

But the 25-year-old, who enjoyed an impressive season in the Premier League with the Canaries, was hit with a devastating blow when he broke a finger in training with his England team-mates at Manchester City's Eastlands Stadium on Thursday.

Birmingham's young goalkeeper Jack Butland, who spent this season on loan at League Two club Cheltenham, will now join the squad for the Euros.

But he will not arrive until next week ahead of the second warm-up fixture against Belgium, so Hodgson will have to use Hart or Green in his first match in charge against Norway in Oslo on Saturday.

A statement on the Football Association website said: "The FA can confirm that Norwich City goalkeeper John Ruddy broke his finger in training on Thursday and has been ruled out of Euro 2012.

"Ruddy was assessed by the England medical staff and will not be able to be part of the tournament. He will travel with the squad to Norway on Friday and watch the game on Saturday evening but return to his club after arriving back in England.

"Birmingham City goalkeeper Jack Butland, who was previously on the standby list, will join up next week and be part of the squad in preparation for the Belgium game and the tournament in Poland and Ukraine."

The only slender consolation for Ruddy is that he is now free to concentrate fully on preparations for his wedding.

Ruddy hadn't expected to feature in the Euros and had booked his wedding to fiancee Laura for June 2, the same day that England will host Belgium.

The Carrow Road number one, who had to miss his bachelor party to join up with England, initially offered to cancel the wedding but Hodgson told him to take the day off so the wedding could go ahead.

Comments
Topics mentioned in this article
Football Norwich City Manchester City Didier Drogba Alou Diarra Lech Poznan John Ruddy Euro 2012
Get the latest updates on ICC T20 Worldcup 2022 and CWG 2022 check out the Schedule, Live Score and Medals Tally. Like us on Facebook or follow us on Twitter for more sports updates. You can also download the NDTV Cricket app for Android or iOS.