City were outplayed by a vibrant young Ajax side with the Dutch outfit prevailing 3-1 having gone a goal down, while goals by Dutch duo Klaas-Jan Huntelaar and Ibrahim Afellay gave German team Schalke 04 a 2-0 victory in London over an insipid Arsenal.

For both the winners it was a rare success.

Ajax's last home win against English opposition in the 1980 European Cup semi-final home leg was against eventual winners Nottingham Forest while Schalke were experiencing their first win in the English capital on their sixth visit.

Expensively-assembled City's task of avoiding their group stage exit from last season was made even more tricky as Schalke's Bundesliga rivals Borussia Dortmund pulled off a superb 2-1 home win over Real Madrid, whose miserable record in Germany continued with just one win in 24 games.

Dortmund lead Real by a point with Ajax four points adrift while City are bottom six points behind the Germans.

While Arsenal and Real failed to maintain their perfect record in this season's competition two sides made it three wins from three.

The 2004 champions Porto edging a 3-2 win over Dynamo Kiev while Spanish surprise packages Malaga continued their stunning maiden appearance in the competition with a 1-0 home win over AC Milan, heaping more pressure on the Serie A side's coach Massimiliano Allegri.

Porto top their group with French powerhouses Paris Saint Germain in second, three points behind, after they came away from Croatia with a 2-0 win over pointless Dinamo Zagreb.

Malaga have a five point lead over Milan while troubled Russian champions Zenit St Petersburg are third a point adrift of Milan after a less than convincing 1-0 win over Anderlecht.

Manchester City manager Roberto Mancini, who ended up with four strikers on the pitch as he desperately tried to rescue something from the game, accepted he was to blame.

"It's probably my fault because I didn't prepare the players well for this game. I accept fault for this defeat."

Arsenal's defeat was uncomfortable viewing for manager Arsene Wenger, sitting in the stands on his last match of his touchline ban, following on from their 1-0 loss to Norwich last weekend.

It was the worst possible result for the Frenchman as he is due to face the wrath of the club's annual general meeting on Thursday.

Real had come from behind to level through Cristiano Ronaldo's 12th goal in the Champions League this calendar year - half of Real's tally of 24 - but they had no answer to defender Marcel Schmelzer's second-half goal.

"It feels overwhelming, it was a sensational evening, you can only imagine something like this in your wildest dreams," said Dortmund coach Jurgen Klopp.

His Real counterpart Jose Mourinho - bidding to become the first coach to win the Champions League with three different clubs - conceded that on balance Dortmund deserved the points. 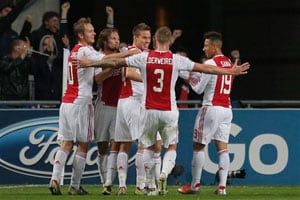 "It was a strange match, neither team was better, but it was an incredibly difficult game," said Mourinho.

"They were very organised and defended very well. Dortmund deserved the victory, but we had our chances to win the game."

Porto had Colombian Jackson Martinez to thank for their narrow win as he struck a double.

"We lost a bit of rhythm in the second half and gave strength to the opposition. When (my) goals help in earning victory they are even more important," said Martinez.

Malaga still have not conceded a goal in the group stage.

"We are not just based on defence, though," said coach Manuel Pellegrini.

"We keep on looking for goals as we did this evening and the score doesn't reflect our dominance."

Comments
Topics mentioned in this article
Football Ibrahim Afellay FC Schalke 04 Arsenal Robin Van Persie Klaas-Jan Huntelaar Euro 2012
Get the latest Cricket news, check out the India cricket schedule, Cricket live score . Like us on Facebook or follow us on Twitter for more sports updates. You can also download the NDTV Cricket app for Android or iOS.