Denmark' s national football team beat Australia 2-0 in its final warm-up match ahead of the UEFA Euro 2012 tournament at the Parken Stadium. 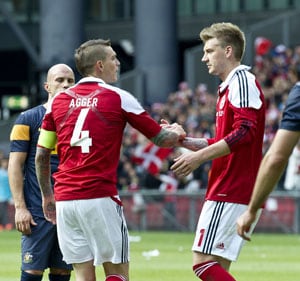 Denmark' s national football team beat Australia 2-0 in its final warm-up match ahead of the UEFA Euro 2012 tournament at the Parken Stadium.

Danish team captain Daniel Agger hammered in the first goal via a penalty kick, to put the Danish team ahead 1-0 just half an hour into the first half. The Danes sealed the match with a second goal 20 minutes into the second half, when centre back Andreas Bjelland shot a loose ball into the Australian net, reported Xinhua.

Denmark started the match as favourites but were tested by Australia, who kept the newly-appointed Danish goalkeeper Stephan Andersen busy, although failed to find the back of the Danish net.

The Danes piled on the pressure after going up 2-0, and never gave the Australians a chance to come back. Danish coach Morten Olsen was unsatisfied despite the win, saying in post-match comments that the team' s defence needed to be strengthened.

The UEFA Euro 2012 football tournament runs from June 8 till July 1 and sees Denmark play Germany, the Netherlands and Portugal in the group stage.

Comments
Topics mentioned in this article
Football Alou Diarra Lech Poznan Euro 2012 Denmark Cricket MS Dhoni Netherlands New Zealand Cricket Team Kenya Australia Cricket Team
Get the latest updates on IPL Auction 2023 and check out  IPL 2023 and Live Cricket Score. Like us on Facebook or follow us on Twitter for more sports updates. You can also download the NDTV Cricket app for Android or iOS.