Vedran Corluka, Nikola Kalinic and Ognjen Vukojevic gave Croatia a 3-1 victory over Estonia in a warmup for the European Championship on Friday. 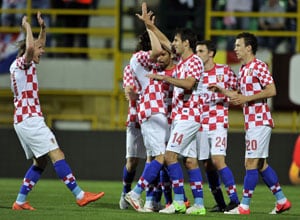 Vedran Corluka, Nikola Kalinic and Ognjen Vukojevic gave Croatia a 3-1 victory over Estonia in a warmup for the European Championship on Friday.

Captain Corluka scored in the 16th minute and Kalinic followed two minutes later after a great pass from Eduardo da Silva. Vukojevic scored 10 minutes from the end from just inside the penalty box.

Estonia replied from a free kick in the 83rd, when a shot by Konstantin Vasillev was slightly deflected by Vukojevic.

Croatia will play another friendly against Norway next week in Oslo.

Croatia will play Ireland on June 10 in the opening match of Group C at Euro 2012. Also in the group are Spain and Italy.

"This is not the team that will open against Ireland, but this was a good test," coach Slaven Bilic said.

Kalinic said Estonia was a "similar team to Ireland and we had a best possible opponent today."

Comments
Topics mentioned in this article
Croatia Alou Diarra Lech Poznan Euro 2012 Uruguay Football Cricket MS Dhoni Netherlands New Zealand Cricket Team Kenya
Get the latest updates on IPL Auction 2023 and check out  IPL 2023 and Live Cricket Score. Like us on Facebook or follow us on Twitter for more sports updates. You can also download the NDTV Cricket app for Android or iOS.