Euro 2012: Blanc warns France not to get caught cold again

Laurent Blanc has urged France to avoid the mistakes they made against England by starting strongly against co-hosts Ukraine in their second Euro 2012 outing in Donetsk on Friday. 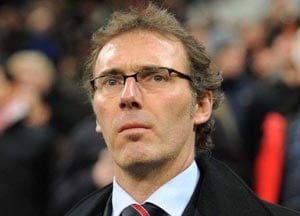 Laurent Blanc has urged France to avoid the mistakes they made against England by starting strongly against co-hosts Ukraine in their second Euro 2012 outing in Donetsk on Friday.

France were second-best for the first quarter of their opening Group D match on Monday and fell behind to a 30th-minute Joleon Lescott header before earning a draw through Samir Nasri's equaliser nine minutes later.

Les Bleus finished the game at Donbass Arena in the ascendancy but they were unable to breach the English defence a second time and Blanc does not want them to handicap themselves with another slow start on Friday.

"We could have been 2-0 down after 25 minutes and it would've been very difficult to come back. But the goal woke us up and tomorrow (Friday) I hope we'll be awake from the first second of the match."

Contrary to the England game, Blanc has a fully fit squad to select from and must make a decision over whether or not to include Yann M'Vila from the start after he overcame an ankle injury.

"We know (M'Vila) is important to our system of play and that he's a player who had a very, very long season, but maybe this rest has helped him regain some freshness," he said.

M'Vila's role was ably filled by Alou Diarra against England and Blanc hinted that, although the two players could play together, he sees it as a straight choice between them.

When he was then asked about the likelihood of M'Vila starting alongside Diarra, Blanc's reply suggested that it was not a configuration he would consider from kick-off.

"They could play together, but only in the same sense as Karim Benzema and Olivier Giroud."

Although Ukraine will be backed by a home crowd at the 50,000-capacity Donbass Arena, Blanc said it might not necessarily work in their favour.

"It could be an advantage and a disadvantage," he said. "I think Ukraine have started the Euro very well, because they beat Sweden.

"The pressure was already there and there will be even more pressure for the second game. Pressure either inhibits people or motivates them -- we'll find out how Ukraine handle it tomorrow."

Having netted a brace in Ukraine's 2-1 win over Sweden, Andrei Shevchenko created the sensation of the first matchday and the 35-year-old national icon is likely to be the centre of attention on Friday.

France captain Hugo Lloris conceded that he would need to be watched closely but warned against the dangers of focusing too much attention on one player.

"It'll be a great pleasure to play against him," said the Lyon goalkeeper.

"He's a former Ballon d'Or and he's had a remarkable career. But our match isn't just against Andrei Shevchenko.

"Ukraine are playing well and they showed that in their opening match. But we'll have to keep an eye on him, because he knows how to lose his marker and he can be decisive in the blink of an eye."

Victory for Ukraine would take Oleg Blokhin's men into the last eight and leave France dangling above the trapdoor of a third consecutive group-stage exit at a major tournament, but Blanc was bullish about his side's outlook.

"I heard the Ukraine coach say he didn't fear France," he said.

"We don't fear them either."

Comments
Topics mentioned in this article
Football Ukraine Gael Clichy Jeremy Menez Euro 2012 France
Get the latest Cricket news, check out the India cricket schedule, Cricket live score . Like us on Facebook or follow us on Twitter for more sports updates. You can also download the NDTV Cricket app for Android or iOS.