Yohan Cabaye committed to Newcastle cause

The France international has endured a tough second season in English football but the former Lille star says he is happy to be where he is and is focused on the fight for English Premier League survival. 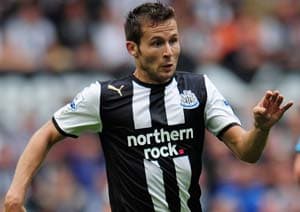 Newcastle midfielder Yohan Cabaye says he is committed to struggling Newcastle's cause despite speculation a move may be in the offing this summer.

The France international has endured a tough second season in English football. Last season, Newcastle over-achieved in coming fifth but this season they remain in danger of the drop.

Even so, the former Lille star says he is happy to be where he is and is focused on the fight for English Premier League survival.

"I have three years' contract left and now my mind is just to save the club. We have two cup finals then it will be the holidays.

"But I am at Newcastle. I don't want to think about the future with two games left. I am very, very happy to play for this club and these fans," Cabaye told the Newcastle Evening Chronicle.

The Magpies face relegated QPR hoping for a win which would keep them up if FA Cup finalists Wigan gop down to Arsenal on Tuesday.

Cabaye admits this season Newcastle have been poor.

"We all made some mistakes at the start of the season - that's why we are fighting for relegation.

"But if we learn from our mistakes, no problem. We are only human and we all make mistakes, but now is time to learn and prepare.

Comments
Topics mentioned in this article
Football Bayern Munchen Newcastle United Manchester City Yohan Cabaye Mark Hughes Alex Ferguson English Premier League
Get the latest updates on ICC T20 Worldcup 2022 and CWG 2022 check out the Schedule, Live Score and Medals Tally. Like us on Facebook or follow us on Twitter for more sports updates. You can also download the NDTV Cricket app for Android or iOS.