Steven Gerrard put Liverpool into an early lead from the spot but Walters replied almost immediately before Kenwyne Jones headed the hosts in front. 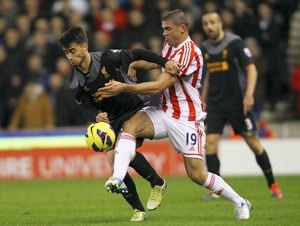 Jonathan Walters scored twice as Stoke beat Liverpool 3-1 in an entertaining affair under the lights at the Britannia Stadium on Wednesday.

Steven Gerrard put Liverpool into an early lead from the spot but Walters replied almost immediately before Kenwyne Jones headed the hosts in front.

After the break Walters made it 3-1 with a superb finish and despite some late pressure, Stoke held on for a more-than deserved win.

Luis Suarez was booed when the announcer read out his name as the home faithful did not forget the dive that the Uruguayan pulled off at Anfield in the October meeting between these two.

While Suarez did not get anything for that then, Stoke manager Tony Pulis was livid he was not punished but it was hard to argue against Howard Webb's decision to hand Liverpool a penalty in the second minute of this clash.

Ryan Shawcross tugged Suarez's shirt in the area and the Reds striker went down before Gerrard calmly slotted home the penalty.

However, just three minutes later Shawcross helped Stoke grabbed what many will say is a trademark goal as he launched a long ball forward that Jones nodded on to Walters and the Republic of Ireland international raced through before firing home.

The last two times these sides met in the Premier League, the games ended goalless so it would not have been pessimistic to believe before this it could be dull again but that was proved wrong as Jones made it three goals in 12 minutes.

The Stoke striker rose to head home Glenn Whelan's corner and send the home fans wild before Matthew Etherington made Liverpool goalkeeper Pepe Reina pull off a stunning save after 21 minutes.

The midfielder fired high but the Spaniard stretched to tip the ball over after a neat cutback by Steven Nzonzi to set up the chance.

Liverpool came into this game on the back of a 4-0 demolition of Fulham at the weekend that proved they were still in with a chance of a top-four place, but they knew away at Stoke would be a much sterner test.

Especially since they have not won on the four visits to the ground in Premier League history but Gerrard had a chance to level the game up moments later but he hit a tame effort wide with Asmir Begovic, the Stoke goalkeeper, seemingly beaten.

Raheem Sterling came on for Suso at the break and the winger almost made an instant impact with a cross for Suarez but the Uruguayan fluffed his effort well wide.

Andy Wilkinson's long throw in the 49th minute made it 3-1 as he found Jones who nodded on again for Walters.

This time he rose to chest the ball and turn before volleying past Reina who could not keep it out despite getting his fingertips to it.

The Stoke fans sang "3-1 to the rugby team" as Liverpool pressed forward desperately trying to get back into the game with Suarez getting booked for a high challenge on Begovic on the hour mark.

Suarez did have the ball in the net soon after but it was ruled out as Jordan Henderson handled in the build up.

Gerrard tested Begovic late on for the visitors but Stoke held on to the three points.

Comments
Topics mentioned in this article
Football Liverpool Manchester City Alex Ferguson Mark Hughes Stoke City Jonathan Walters English Premier League
Get the latest updates on Fifa Worldcup 2022 and check out  Fifa World Cup Schedule, Stats and Live Cricket Score. Like us on Facebook or follow us on Twitter for more sports updates. You can also download the NDTV Cricket app for Android or iOS.