Tottenham were hoping to get back on track after losing to Liverpool on Thursday, but instead they suffered a damaging second successive defeat. 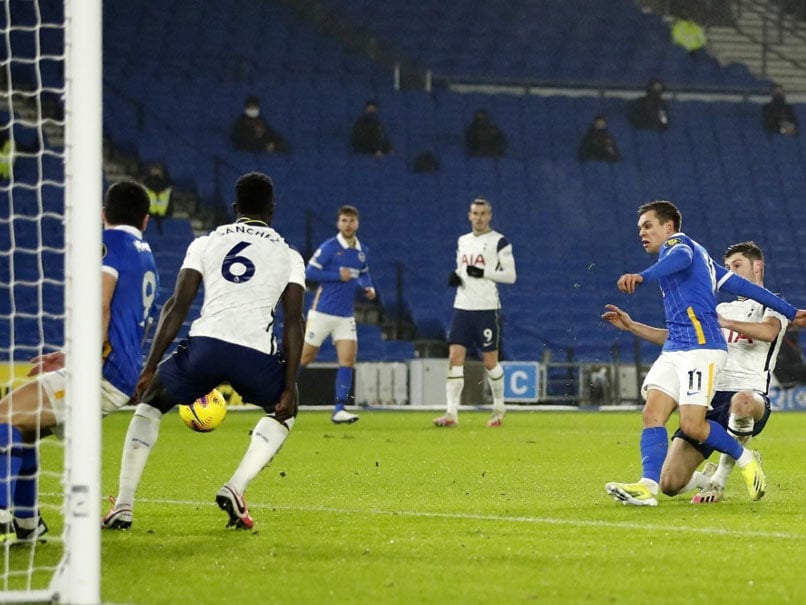 Jose Mourinho admitted his "sad" Tottenham flops "lacked energy" after Leandro Trossard rocked their top four challenge as the Brighton forward sealed a shock 1-0 win on Sunday. Mourinho's side were hoping to get back on track after losing to Liverpool on Thursday, but instead they suffered a damaging second successive defeat. Trossard netted in the first half at the Amex Stadium and, with Tottenham's Harry Kane sidelined by injury, the visitors lacked the quality to salvage an equaliser. Tottenham are languishing in sixth place, with just two wins in their last nine Premier League matches.

They trail six points behind fourth-placed Leicester, albeit with a game in hand, after only their second defeat in 10 away league games this season.

Mourinho conceded his players were feeling sorry for themselves and couldn't find the drive to rescue a point.

"We didn't start well. In the first half I felt the team was probably too sad with the goal conceded and the situation," Mourinho said.

"There was a lack of energy. In the last 25, 30 minutes they gave everything but of course with some limitations.

"The boys showed great spirit in the second half and showed they are suffering. They tried to fight against that sadness."

The title bid that looked possible for Tottenham in December is fading fast as leaders Manchester City are now 11 points clear of the north Londoners.

A victory against seventh-placed Chelsea on Thursday is essential to halt Tottenham's sudden decline away from the Champions League places.

"I have nothing negative to say about them. I leave the game with a good feeling about my boys because they tried hard in the second half," Mourinho added.

The Seagulls were the only team in the top four divisions in England without a home league victory this season, but they finally ended that dismal sequence at the 11th attempt.

Gareth Bale was handed only his second league start since returning for his second spell at Tottenham.

The on-loan Real Madrid forward replaced Kane, who suffered his latest in a long list of ankle problems against Liverpool, but once again he failed to impress.

Brighton nearly made the perfect start when Pascal Gross hit the outside of the post after good work from Alexis Mac Allister.

Mac Allister fired over from long range soon after as Brighton's vibrant start pushed Tottenham onto the back foot.

The hosts deservedly took the lead with a flowing move in the 17th minute.

Mac Allister picked out Gross and his cut back found Trossard for a clinical close-range finish.

Son Heung-min led Tottenham's first incisive raid when he found Steven Bergwijn on the edge of the penalty area, but the forward dragged his shot wide.

Bale was subdued in attack but the Wales star came in useful at the other end when he nodded clear just as Lewis Dunk's header was flying towards the top corner.

Mourinho sent on Carlos Vinicius in place of centre-back Davinson Sanchez at half-time.

The on-loan Benfica striker made an immediate impact with a towering leap to meet Bale's corner with a header that was blocked by Brighton keeper Robert Sanchez.

It made no difference and Brighton could have doubled their lead when Mac Allister shot into the side-netting from a tight angle before Neal Maupay headed wide from Solly March's cross.

Vinicius offered a glimmer of hope with a powerful effort from the edge of the area that Sanchez pushed away, but it was too little too late for spluttering Tottenham.

Son Heungmin Football
Get the latest updates on T20 World Cup, check out the T20 World Cup Schedule and Live Score . Like us on Facebook or follow us on Twitter for more sports updates. You can also download the NDTV Cricket app for Android or iOS.