The England left-back beat Newcastle goalkeeper Tim Krul with a wickedly swerving strike from 30 yards two minutes before half-time, after Papiss Cisse had put the hosts in front after only 65 seconds. 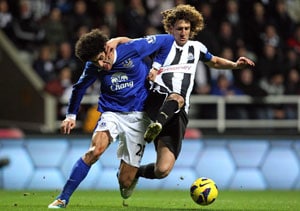 Leighton Baines scored a sensational free-kick as Everton came from behind to win 2-1 at Newcastle United on Wednesday and climb to fifth place in the Premier League.

The England left-back beat Newcastle goalkeeper Tim Krul with a wickedly swerving strike from 30 yards two minutes before half-time, after Papiss Cisse had put the hosts in front after only 65 seconds.

On the day Newcastle announced that they had agreed to sell Demba Ba to Chelsea, Cisse was keen to impress, but it was Everton who took the spoils thanks to a 60th-minute winner from substitute Victor Anichebe.

The victory took Everton to within two points of fourth-place Chelsea, while Newcastle, who had prospective new signing Mathieu Debuchy of Lille watching in the stands at St James' Park, remain 15th.

Despite Ba's absence, Cisse was deployed in a wide role, but he wasted no time in stating his case for a central starting berth.

There was barely a minute on the clock as Krul launched a high kick downfield and when Everton centre-backs Phil Jagielka and Sylvain Distin both missed the ball, Cisse stole in to loop a header over Tim Howard.

The Newcastle fans struck up a cheery chorus of 'Are you watching Demba Ba?', and Cisse would have given them even more to smile about in the fourth minute had he got a touch to Shola Ameobi's inviting low cross.

Everton roused themselves, and Krul had to produce a flying save to keep out a curling Baines free-kick before throwing himself at the feet of the same player moments later.

Newcastle threatened again on the half hour, James Perch heading against the post from Vurnon Anita's left-wing free-kick, while Krul produced a fine block to thwart Steven Pienaar at the other end.

Baines had created Pienaar's chance and in the 43rd minute he took matters into his own hands, levelling the scores with an outrageous 30-yard free-kick that beat Krul with a devilish swerve.

Ameobi came close to restoring Newcastle's lead in the 58th minute, but after brilliantly cushioning Sylvain Marveaux's lofted pass on his instep, he could only flick the ball wide of Howard's left-hand post.

Everton responded instantly, Nikica Jelavic haring down the left and crossing for Anichebe to tap home from close range.

Newcastle had their chances to equalise, Howard saving from Cisse and then spreading himself brilliantly to thwart Davide Santon, but Everton held on.

Comments
Topics mentioned in this article
Football Manchester City Everton Newcastle United Mark Hughes Leighton Baines Alex Ferguson English Premier League
Get the latest updates on ICC T20 Worldcup 2022 and CWG 2022 check out the Schedule, Live Score and Medals Tally. Like us on Facebook or follow us on Twitter for more sports updates. You can also download the NDTV Cricket app for Android or iOS.