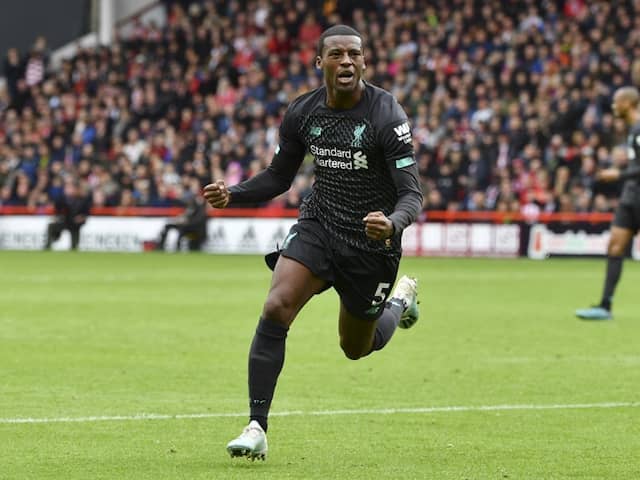 Liverpool won the match thanks to Georgio Wijnaldum's goal© AFP

Liverpool moved eight points clear at the top of the table, but were made to work hard for a 16th straight Premier League win as Georginio Wijnaldum's fortunate strike handed the visitors a 1-0 victory at Sheffield United on Saturday. The European champions looked short on invention against the well-organised Blades until Wijnaldum's shot from the edge of the box 20 minutes from time trickled between the legs of United goalkeeper Dean Henderson. However, another vital three points moved Liverpool closer to a first top-flight title in 30 years as they opened up a sizeable advantage over Manchester City, who can cut the gap back to five points with victory later at Everton.

Chances began to come for Jurgen Klopp's men towards the end of the first-half as Sadio Mane sliced horribly wide with just Henderson to beat and then hit the post when it seemed easier to score from Roberto Firmino's pass.

Mane was unfortunate minutes into the second period, though, as he was taken out by John Lundstram as he broke into the box.

Referee Anthony Taylor was unimpressed and it was another example when VAR backed the official's decision when it should have been overturned.

The hosts had their chances to spring a massive shock as Adrian turned behind a long-range drive from Oliver Norwood before Andy Robertson made a brilliant block to deny John Fleck the opener.

All of Sheffield United's good work was undone with one mistake when Wijnaldum pounced on a loose ball 20 yards from goal, but his strike should have been easily handled by Henderson, who instead watched on with horror as the ball slipped under his grasp.

The Manchester United loanee made some amends 11 minutes from time when Mohamed Salah broke clean through, but could not beat Henderson with a low finish.

That save could still have salvaged a point had substitute Leon Clarke not blazed over with the goal at his mercy late on.

Instead, Liverpool held on to grind out the sort of win that could finally make them champions come May.

Liverpool Sheffield United Georginio Wijnaldum Football
Get the latest Cricket news, check out the India cricket schedule, Cricket live score . Like us on Facebook or follow us on Twitter for more sports updates. You can also download the NDTV Cricket app for Android or iOS.