Tottenham have not won an English top-flight title in 60 years, but showed their title credentials with a defensive resilience to frustrate Manchester City's domination of possession. 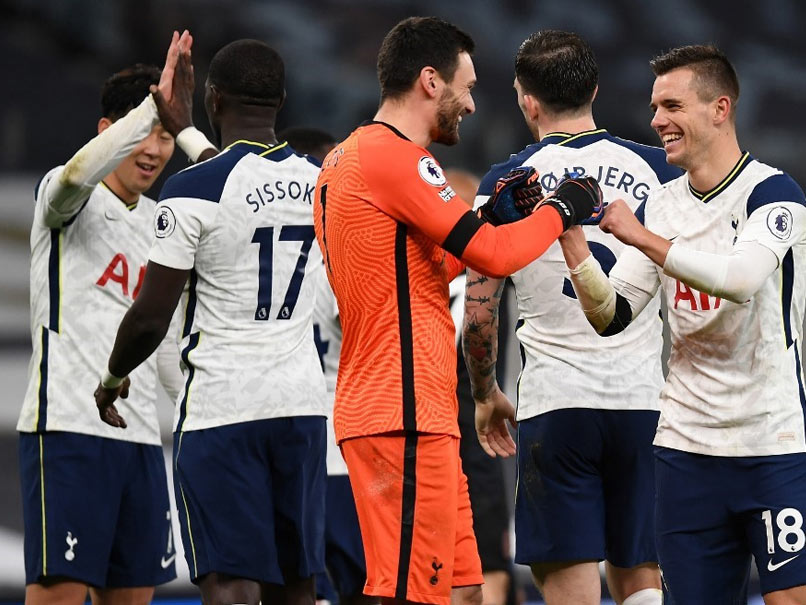 Tottenham shot to the top of the Premier League table with a 2-0 win over Manchester City.© AFP

Pep Guardiola admitted Manchester City played perfectly into Tottenham's hands as Spurs shot to the top of the table with a 2-0 win thanks to goals on the counter-attack from Son Heung-min and Giovani Lo Celso. Spurs have not won an English top-flight title in 60 years, but showed their title credentials with a defensive resilience to frustrate City's domination of possession and ruthlessly take their chances as they scored with their only two shots on target. Defeat leaves Manchester City already eight points off the leaders, albeit with a game in hand, down in 11th with just three wins from their opening eight games.

The writing was on the wall for the visitors after just five minutes when one simple ball over the top from Tanguy Ndombele caught Joao Cancelo sleeping and Son had the pace and precise finish under Ederson to register his sixth goal in 11 games against City.

"The stats speak for themselves, we were better in many departments but we conceded a goal we cannot concede," said Guardiola.

"It was the perfect scenario for them. We knew (Harry) Kane drops and Son runs in behind. We have to defend better."

Victory ensured Tottenham will finish the day on top of the table for the first time in six years. Jose Mourinho's men move two points ahead of Chelsea, who they face next weekend at Stamford Bridge.

"I prefer to be top but it is not an obsession," said Mourinho. I don't care about the table, the opponent, the competition. I want to go to the next game believing we can win the game.

"This team is a process. There are good signs of evolution at every level, we are happy with that, but I dont care too much about the table right now."

Guardiola ended speculation over his future by committing to a new contract as City boss until 2023 this week.

The Catalan has won eight league titles at Barcelona, Bayern Munich and City, but Guardiola now faces a challenge he has never had before in rebuilding a second title-winning side at the same club.

For the sixth consecutive league game City failed to score more than once with little sign of Guardiola's men rediscovering the cutting edge of the free-scoring sides that won back-to-back titles in 2017/18 and 2018/19.

"We are struggling to score goals this season, that can happen," added Guardiola. "They shot two times (on target), two goals and we cannot score with 22 shots."

Tottenham's title challenge will be fully tested with Arsenal, Liverpool and Leicester also to come before Christmas, but they could not have made a better start to that daunting run.

"You can see it is open with the way the table stands," said Kane after Spurs' fourth straight league win. "Whoever can put a good spell together has a chance of winning it."

After the early opener, the game then settled into the familiar pattern of now 24 clashes between Mourinho and Guardiola as Mourinho's men defended their lead deep and waited for the chance to counter again.

The visitors had 66 per cent of possession but struggled to break down the mass ranks of Spurs defence.

Gabriel Jesus inadvertently deflected Kevin De Bruyne's low shot wide before Jesus did tee up Aymeric Laporte to slot home, but the goal was ruled out for handball by the Brazilian after a VAR review.

Instead, it was Tottenham who landed the knockout blow 25 minutes from time with another simple counter-attack.

Kane was afforded plenty of time and space to collect a loose ball in midfield and drive forward before feeding Lo Celso, who had barely been on the field a minute and with his first two touches, controlled and then slotted the ball low beyond the advancing Ederson.

Son Heungmin English Premier League Football
Get the latest updates on IPL Auction 2023 and check out  IPL 2023 and Live Cricket Score. Like us on Facebook or follow us on Twitter for more sports updates. You can also download the NDTV Cricket app for Android or iOS.