Eric Dier scored the only goal of the match as Tottenham Hotspur stuttered past bottom-placed Cardiff City. 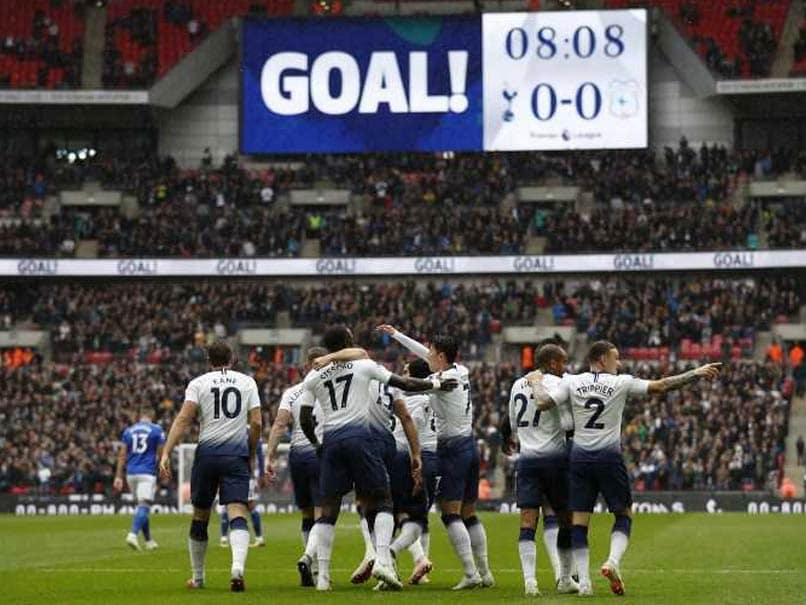 Tottenham Hotspur moved to provisional third in the Premier League with the 1-0 win.© AFP

Tottenham Hotspur bounced back from a bruising Champions League defeat to Barcelona by beating Cardiff 1-0 at Wembley on Saturday to close to within a point of Premier League leaders Manchester City and Liverpool. Outclassed by the brilliance of Lionel Messi in midweek, Spurs were grateful for Cardiff's lack of firepower to ensure a lacklustre performance after Eric Dier's early opener went unpunished. Toby Alderweireld cleared off the line from Josh Murphy and Hugo Lloris was forced into a fine save from Sean Morrison as Spurs failed to add to their advantage despite Joe Ralls's red card half an hour from time.

Mauricio Pochettino will no doubt now welcome a two-week break to get a number of injured stars back fit as the hosts were again missing Dele Alli, Christian Eriksen, Jan Vertonghen and Mousa Dembele.

All four were involved deep into the FIFA World Cup and despite a hangover from the exertions of many of Pochettino's squad in Russia and the uncertainty over when the club's new stadium will be completed, a return of six wins from their opening eight Premier League games matches Spurs' best ever start to a campaign under the Argentine.

By contrast to their domestic form, Dier was one of three changes from a second straight Champions League defeat that leaves Pochettino's men staring down the barrel of an early European exit.

And he made an almost instant impact with his first goal since April 2017, slamming home an easy finish from close range on eight minutes after Davinson Sanchez's blocked header fell kindly into his path.

Spurs, though, failed to build on that positive start and gave a Cardiff side still looking for their first win back in the top flight plenty of encouragement.

Lloris was badly at fault for Barca's opening goal on Wednesday as he rushed from his line and was caught in no man's land as Philippe Coutinho stroked home.

And that seemed to be playing on the France captain's mind as he didn't come to collect a through ball and had to be bailed out by Alderweireld's brave clearance after Murphy flicked the ball goalwards.

Spurs should still have put the game to bed before half-time as Lucas Moura turned Son Heung-min's low cross wide from point-blank range before the South Korean blazed over when clean through on goal.

Harry Kane had bounced back to form with four goals in his last three games, but the England captain was kept largely quiet.

Cardiff goalkeeper Neil Etheridge produced a good save to parry Kane's header early in the second half before Lucas's follow-up effort was brilliantly cleared off the line by Morrison.

The visitors' task was made even harder just before the hour mark when Ralls was shown a straight red card for a cynical lunge on Lucas.

Yet, Cardiff could still have levelled when Morrison's header was turned onto the post by Lloris and Alderweireld was again on hand to hack clear the danger.

Cardiff City Eric Dier Harry Kane English Premier League Tottenham Hotspur vs Cardiff City, Game week 8 Football
Get the latest updates on IPL 2021, check out the IPL 2021 Schedule and Indian Premier League Live Score . Like us on Facebook or follow us on Twitter for more sports updates. You can also download the NDTV Cricket app for Android or iOS.