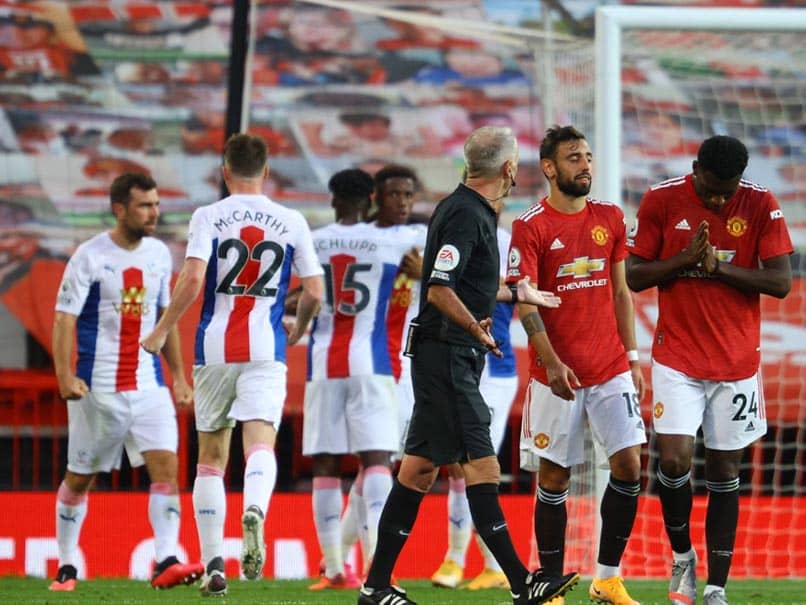 Premier League: Manchester United will look to bounce back, after a 3-1 defeat against Crystal Palace.© AFP

Manchester United and Chelsea need a swift response to their title credentials being damaged by home defeats last weekend, while one or both of Liverpool and Arsenal's perfect records will come to an end when they face off at Anfield on Monday night. Crystal Palace and Everton also have the chance to claim top spot when they meet at Selhurst Park on Saturday, while the other side with maximum points from the opening two weekends, Leicester, face a daunting trip to Manchester City. Gareth Bale will not be fit to feature for Tottenham when they host Newcastle on Sunday, but Harry Kane and Son Heung-min are enough for the Magpies to fear after the England captain set up the South Korean to score four at Southampton.

Chelsea travel to bottom-of-the-table West Brom, who are still seeking their first point back in the top-flight.

AFP Sport looks at some of the main talking points ahead of this weekend's action:

Optimism that United could return to challenging for the title after a 14-game unbeaten run to end last season was washed away with that unbeaten record as Palace were good value for their 3-1 win at Old Trafford.

A month-long off season was also disruptive off the field with captain Harry Maguire being handed a suspended prison term in Greece, which he is appealing, and teenage striker Mason Greenwood being sent home by England for breaching coronavirus protocols when on international duty.

There is also outcry among the United fanbase at a lack of signings in the transfer market, while their rivals still spend freely despite the economic affects of the pandemic.

The Red Devils desperately need three points at Brighton on Saturday to bring some calm, but the Seagulls have shown enough in their opening two games to suggest United face a far tougher test than when they won 3-0 on the south coast in June.

Brighton were the better side for long spells despite losing 3-1 to Chelsea on the opening weekend and bounced back with a comprehensive 3-0 win at Newcastle.

"We need to get competitive games and minutes into the legs of our players because normally we're in a pre-season after such a short training (period)," said Solskjaer.

"It's great for them to get minutes as well but also goals."

Everton's investment in the transfer market is reaping immediate rewards as they have won their opening two league games of the season for the first time in seven years.

Carlo Ancelotti has been able to recruit Champions League-winning quality in James Rodriguez, alongside Brazilian international Allan and Abdoulaye Doucoure in midfield.

"The players have come back with more ambition and motivation," said Ancelotti after finishing 12th last season. "The new signings have helped us be more motivated."

Palace will provide an early test of how far Ancelotti's men can go this season as they have picked off Southampton and United at ease on the counter-attack with Wilfried Zaha rediscovering his best form to score three times in two games.

Arsenal have got the better of Liverpool twice in recent months, but the acid test for Mikel Arteta's side comes at what he described as the "toughest place to go in the world", Anfield, on Monday.

The Gunners rode their luck to beat the Reds after Jurgen Klopp's men had sealed the title last season, but the Community Shield clash between the two a month ago was a far more balanced game, which Arsenal won on penalties after a 1-1 draw.

Arsenal have built on their momentum from winning the FA Cup by beating Fulham and West Ham to strengthen the conviction that Arteta can lead them back into the top four this season.

But Liverpool showed in sweeping aside Chelsea 2-0 at Stamford Bridge last weekend that they remain the team to beat and have only strengthened with the signing of Thiago Alcantara.

Arsenal Football
Get the latest updates on IPL 2020, check out the IPL Schedule for 2020 and Indian Premier League (IPL) Cricket live score . Like us on Facebook or follow us on Twitter for more sports updates. You can also download the NDTV Cricket app for Android or iOS.